Happy Thanksgiving to my American neighbours

We celebrated Thanksgiving here in October.  Officially Canadian Thanksgiving occurred on October 11th, however you may remember that my DD # 2 was here visiting from Newfoundland.  She was leaving to fly home on October 9th so we had our Thanksgiving dinner on October 8th at DD # 1’s house in Whitehorse.  There were twelve adults and three children around the table for turkey with all the trimmings and apple and pumpkin pie.  This included my nephew and his beau and my long time friend Jan and her two daughters and one grandson.  They have celebrated many Thanksgiving dinners with us.  The tradition I set up for my family is that we all go around the table and say what we are thankful for this year.  The younger crowd all groan when I bring it up but they would object if we didn’t do it. 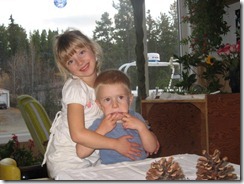 These two are thankful for each other…

Elaine, master of the Travelling Goat group, has asked me to tell the group members about Canadian Thanksgiving.  I confess that I had no idea where it came from.  I know American Thanksgiving originates with the pilgrims, but whence Canadian Thanksgiving?  I’m happy to tell you  that Wikipedia helped me out – and I know you can’t rely on them but their information corresponded with a couple of other sites so it must be at least partly accurate.  This is long, but interesting.

The history of Thanksgiving in Canada goes back to an explorer, Martin Frobisher, who had been trying to find a northern passage to the Pacific Ocean.[7] Frobisher's Thanksgiving was not for harvest but homecoming. He had safely returned from a search for the Northwest Passage, avoiding the later fate of Henry Hudson and Sir John Franklin. In the year 1578, he held a formal ceremony in Newfoundland to give thanks for surviving the long journey. The feast was one of the first Thanksgiving celebrations by Europeans in North America. Frobisher was later knighted and had an inlet of the Atlantic Ocean in northern Canada named after him — Frobisher Bay.

At the same time, French settlers, having crossed the ocean and arrived in Canada with explorer Samuel de Champlain, in 1604 onwards also held huge feasts of thanks. They even formed 'The Order of Good Cheer' and gladly shared their food with their First Nations neighbours.

After the Seven Years' War ended in 1763 handing over of New France to the British, the citizens of Halifax held a special day of Thanksgiving. Thanksgiving days were observed beginning in 1799 but did not occur every year.[8] After the American Revolution, American refugees who remained loyal to Great Britain moved from the newly independent United States and came to Canada. They brought the customs and practices of the American Thanksgiving to Canada.[citation needed]

My aside here… some of my ancestors were United Empire Loyalists.  When I was a child we had a rocking chair in our basement, a beautiful wood and leather creation.  My great, great, great (not sure how many back) grandmother had ridden in the rocking chair in the back of an ox cart with her baby in arms when she and her husband fled Boston after the tea party.  He was a tax collector there.  The chair is now in a museum in Quebec where my mother donated it.

The first Thanksgiving Day after Canadian Confederation was observed as a civic holiday on April 5, 1872 to celebrate the recovery of the Prince of Wales (later King Edward VII) from a serious illness.[9]

Starting in 1879 Thanksgiving Day was observed every year, but the date was initially a Thursday in November. The date of celebration changed several times until, in 1957, it was officially declared to be the second Monday in October.[9] The theme of the Thanksgiving holiday also changed each year to reflect an important event to be thankful for. In its early years it was for an abundant harvest and occasionally for a special anniversary.[citation needed]

After World War I, an amendment to the Armistice Day Act established that Armistice Day and Thanksgiving would both be celebrated on the Monday of the week in which November 11 occurred.[9] Ten years later, in 1931, the two days became separate holidays, and Armistice Day was renamed Remembrance Day.

And there you have it.

Happy Thanksgiving to all who are observing it this week.  May you remember your roots, give thanks for your present and pray for those who follow you.