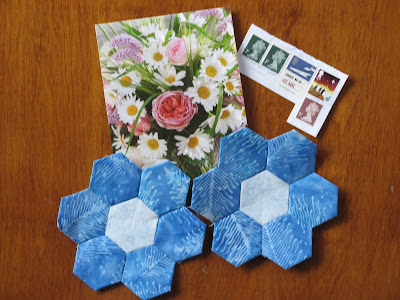 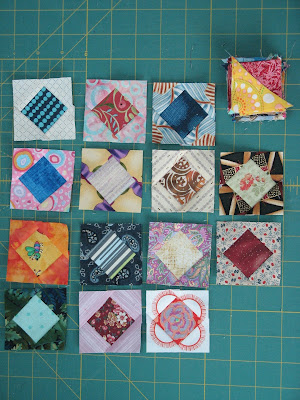 A wee bit of sewing

I started to write "a wee bit of snow"...  We did have our first snowfall yesterday, about two inches worth, and I thought it would stay around for a while.  But the sun came out this morning and before I could get a nice photo of the fluffy whiteness it was starting to melt away.  There will be ice on the road tomorrow morning.

I have managed to do some sewing in the last week.  I am determined to finish the postage stamp quilt this year.  Since I decided that it needs three more rows, I have to make 63 more of those 2 1/2 inch blocks.  So I have been sorting scraps, and cutting and matching. 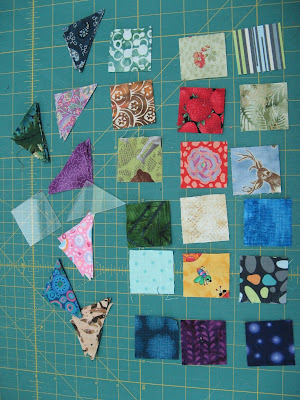 I do hope that someone can tell me how to turn my pictures in Blogger.  For some reason it always turns them sideways.
Anyway I have made 13 blocks - 50 more to go! 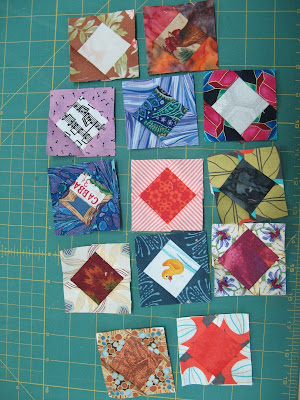 And I have my swap hexies for October done.  These are going to Jenny in Queensland, Australia.  I loved making the one with the raindrops falling on the flowers in the centre hexie.  I admit it is a bit busy though. 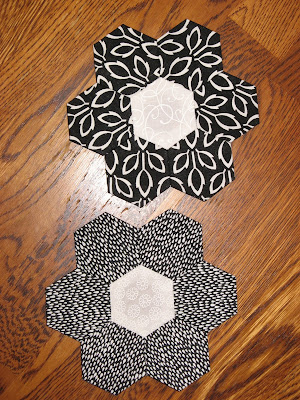 That's all for this week.  Not bad if I do say so myself!

Today is Thanksgiving Day in Canada.  I have been having an allergic reaction to something all day and took Benadryl and slept.  But I was at my friend Linda's yesterday for a delicious Thanksgiving feast - turkey, cranberry sauce, potatoes, yams, Brussels sprouts, beets, pumpkin pie and cheesecake.  And lots of friends to party with - there were thirteen of us for dinner.  And seven dogs.

Last time I posted I was at a quilt retreat.  I worked on these Union Jack blocks.  I am doing this quilt as a quilt as you go, don't ask me why, it just seemed like it would be easier.  I am going to use a dark blue sashing between the blocks but I decided they have to be at least two inches, so I am going to have to figure out a way to add batting to them.  So I have made it more challenging for myself.  Well I like a challenge. 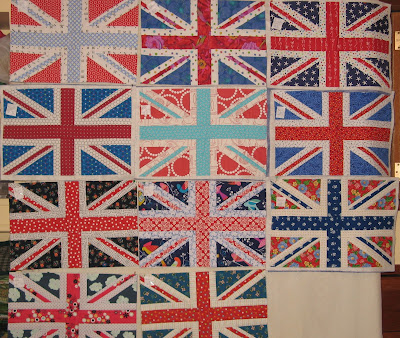 I received these blocks in a Canadians Quilt swap.  One is missing from the photo because I have to do some repair on it.   At the retreat I cut the batting and backing for the blocks and got five of them quilted.

My other major project was my postage stamp quilt.  Here it is all put together. 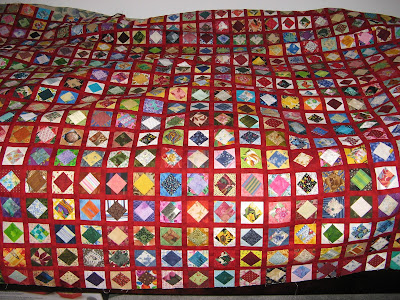 And then I decided I need three more rows.  So I have to make 63 more blocks.  These blocks are 2 1/2 inches before adding the sashing.  I plan to FINISH this quilt this year.  So I have been diligently cutting pieces for my blocks.

You may have heard that we had a visit in my little town of Carcross from the Duke and Duchess of Cambridge.  Although I wouldn't call myself a "royalist" as we say in Canada to indicate people who are enamoured with the royal family, I wasn't going to miss this opportunity to see them.  I didn't have a conversation with them specifically but I got a fantastic photo of Kate while she was speaking to my friend's daughter.  The little girl was overwhelmed as you can see in the photo. 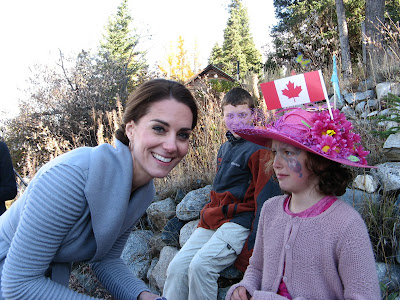 That's all the excitement for this week.  I am now working two jobs for the next month.  We are having an election in the Yukon and I am a returning officer.  I figure I'll have some moments to sew here and there and we are going to have a mini retreat when it is done.  Yahoo!

I hope everyone has had a wonderful Thanksgiving!