The word this week in the 52 week photo challenge is “torch”.  I looked this word up in the dictionary.  It doesn’t have a lot of definitions and they all have to do with fire, except for when it is used as a reference to a flashlight.  But that is a British term that isn’t used here in Canada, so it didn’t feel right to appropriate it.

But I had an aha moment and got my torch photo.  The electric start button on our barbeque ceased to function a couple of years ago.  I think it happened the time when the barbeque caught fire…  So every time I light the barbeque, (which isn’t that often because that is the one cooking chore that hubby does without question), I have to lift off the grate, light the match, turn on the gas, set it aflame, blow out the match, then put the grate back on with out burning myself on the flame.  That is until the other day when hubby showed me how he does it… 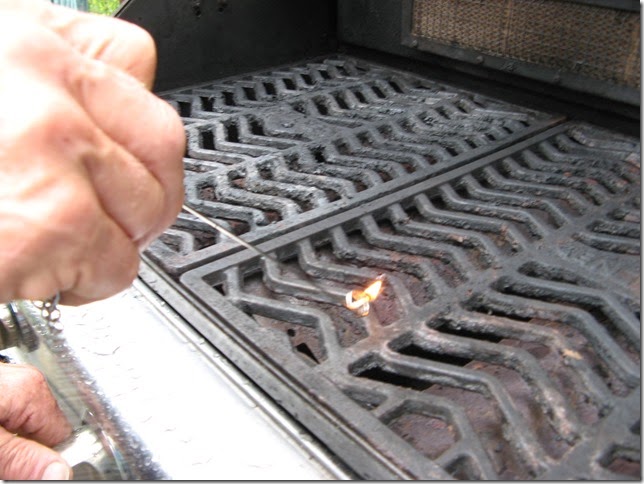 The photo doesn’t fully show this thing.  Apparently it came with the barbeque and is for this purpose.  It is a wire with a double loop at the end (which you can just make out in the photo).  You put the match between the two loops of wire and they hold it in place.  Then when you light the match you can put it down through the holes in the grate to where the gas is coming out underneath and easily light it.

This is called torching the barbeque.  With a torch.  Of sorts…. A really small torch. 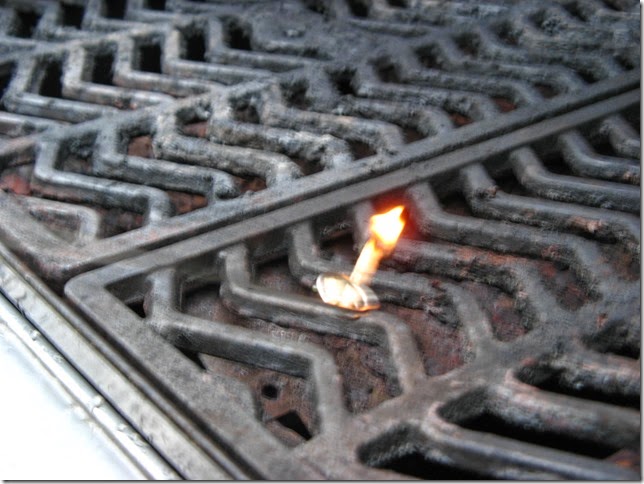 I have accomplished a very small amount of sewing in the last week.  These blocks are for July in the Canadians Quilt Bee. 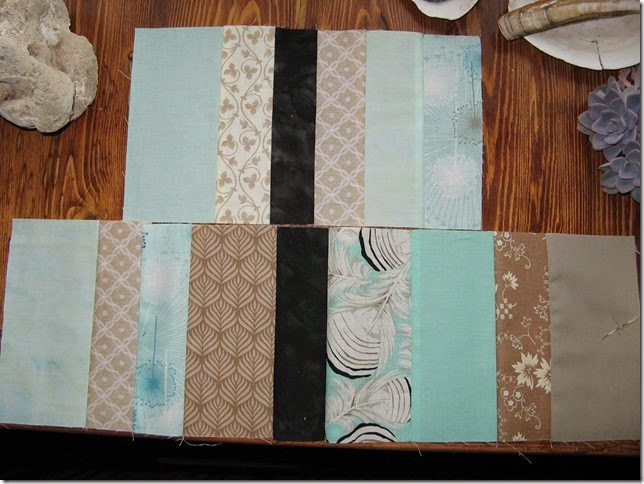 And I put second rounds on two hexie flowers.  These red second round hexies were my own choice.  I love the fun and colour in this flower! 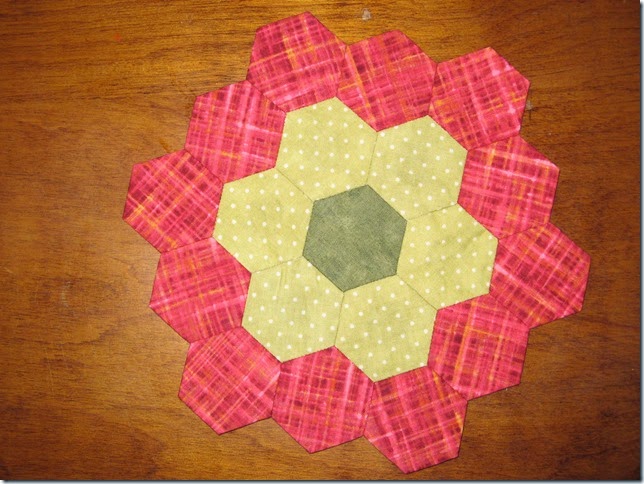 This batch of second round hexies came from Coralie, my June swap partner in the Inchy Hexagon Flower Swap.  And I had the perfect flower to add them to! 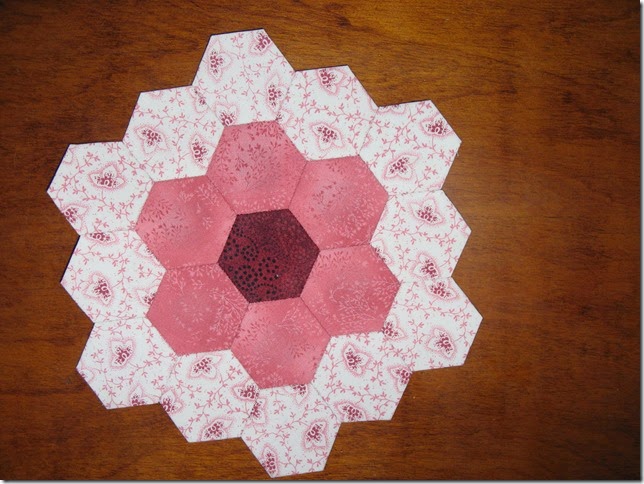 And last but not least… Julien is now six weeks old and he weighs six pounds!!  He is off the oxygen.  He has to learn to breast/bottle feed and he has to be a week without episodes of low oxygen sats and then he will be able to go home.  His grandma (my s-i-l) got to hold him for the first time the other day.  So sweet!

That is all.  I hope your sewing is going well!

Two forms of mobility in the Canada Day parade in my town.

I have no idea what vintage this car is but it is pretty cool.  The bike tires and the car tires look almost the same! 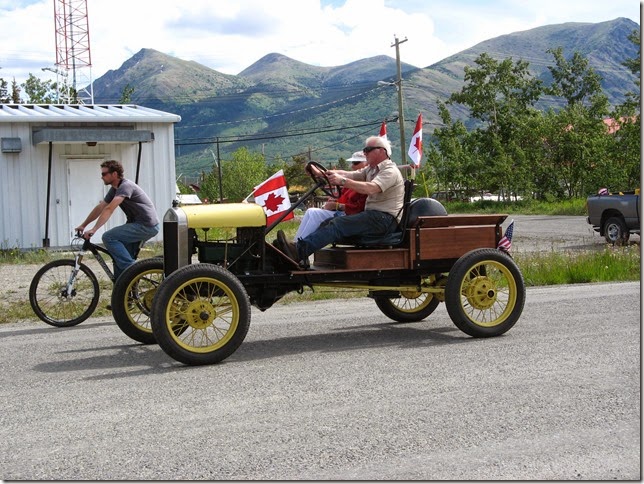 Linking up with Shaz at Alsha's Space.

I had big ambitions for FNSI but I was too tired to do anything more than some hand sewing.  I made the hexie flowers for my July swap partner in the Inchy Hexagon Flower Swap.  She asked for florals with plain centers and this is what I made. 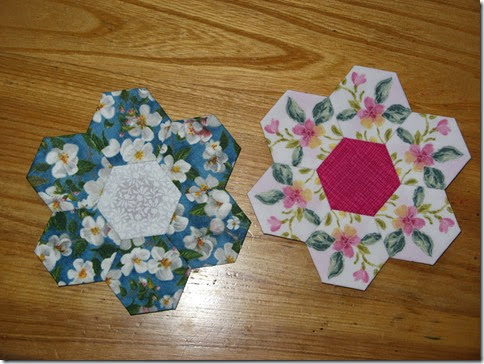 I like the pink one more than the blue…. but what is the saying about divas and chorus lines – you can’t have one without the other or something like that…

I hope you had a great sewing time for FNSI too!

Val at Val's Quilting Studio is hosting a year long piggy bank challenge and invited me to join.  At first I waffled because a) I didn’t have a container, b) I spend my change on tea and pop, c) I really don’t need to save for more fabric, d) I was being a party pooper.

But I love to see people trying to create some fun in blogland and so I decided to join.  We are supposed to identify a container for our piggy bank and a purpose for our savings.

First I needed a container.  I found one at a garage sale last weekend when I was at the Atlin Arts and Music Festival (photo below copied from their site)

Granddaughter and I painted it with acrylic paints and then I baked it to set the paint. 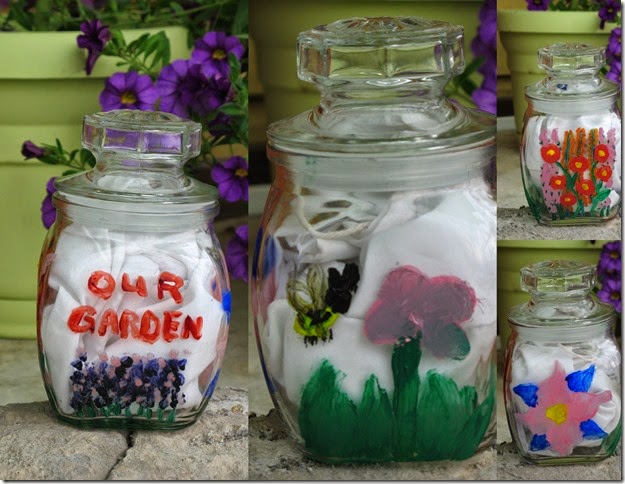 I have decided that each Friday at the end of the work week (when I remember) I will add what ever change I have left in my pocket from the week, except for the loonies and toonies.  For those who don’t know Canada no longer has paper $1 and $2 bills.  We have coins.  Big, heavy coins.  We call them loonies and toonies.  Here is my addition for this week. 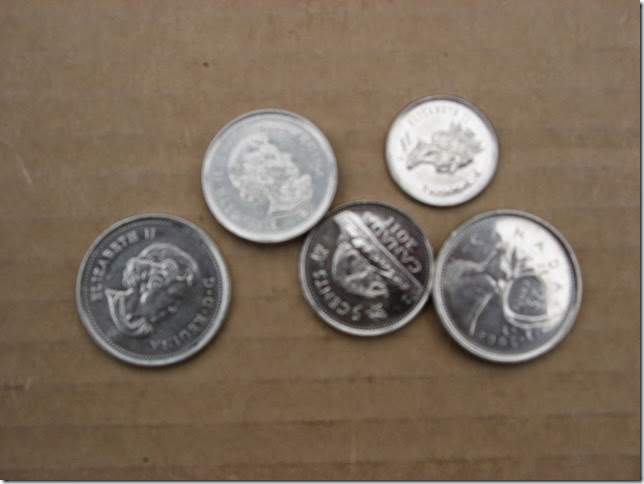 We no longer have pennies in Canada either, so my collection will be all silver.  This will be interesting.

Linking up to Val's piggy bank challenge, which by the way ends on July 6th, 2015.  And what will I do with my moolah?  I haven’t really decided yet but I may have to host a five year blog birthday party with giveaways…. as my blog will be five years old on June 29, 2015.

Photo Challenge Calm … and the Excitement of Sewing!

The word for the 52 week photo challenge this week is calm….  My friend was very upset yesterday after a phone call from her mother and we were talking about how to calm yourself instead of reacting when our emotions get triggered.  We ended up doing a grounding exercise – feeling the solidity of our connection to the ground and the chair that we were sitting on, letting go of tension from parts of our bodies and picturing ourselves in a place that we find calm and peaceful.  So I got to think about where is calm for me.  Although many places would qualify at different times, this is one of my favourites… my yard…The grass is patchy, there are lots of weeds (or one could call them wild flowers) and the landscaping is sort of non-existent, but it is lovely and open and sunny, and as you know I see wild animals there. 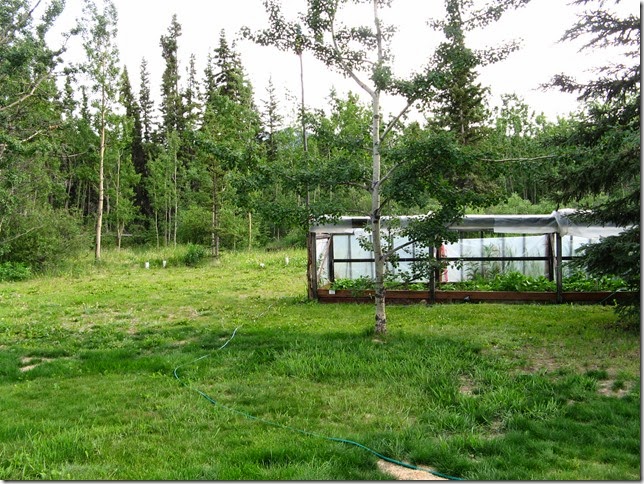 And now that we have been calm, and I have linked up to Alsha's Space, let’s have a little excitement!!

I won another giveaway about a month ago; this one was from Deonn of Quiltscapes.  The package arrived on Thursday – a nice little selection of happy fat quarters and some scraps from Deonn’s projects with this fabric.  Thanks Deonn!  I was immediately inspired… 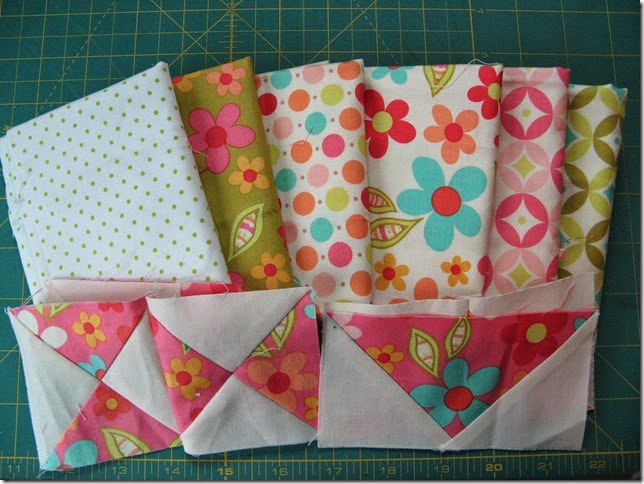 On the weekend I was going to a little party where we would be celebrating three friend’s birthdays.  So I had to whip up some gifts.  Three pouches… 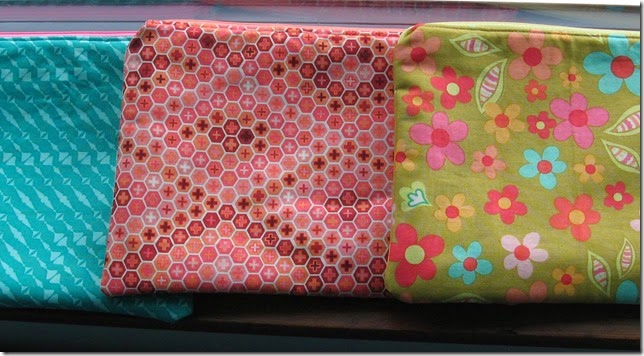 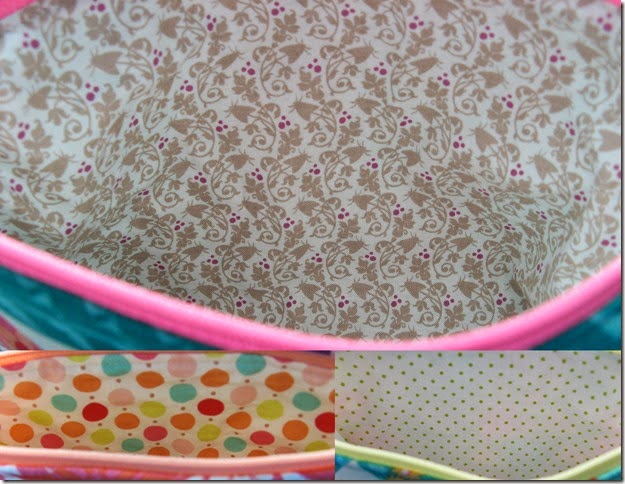 I used this tutorial from Amy's Creative Side although just for the pouch construction, not for the paper pieced panels.  I took the inspiration for my panels from Deonn’s scraps.

And if you click on the link to Deonn’s blog above you will find that she is having another giveaway!!

Email ThisBlogThis!Share to TwitterShare to FacebookShare to Pinterest
Labels: 52 week Photo challenge, This Week I....

My grand nephew Julien is now three weeks old and he is 3.53 lbs.  He has gained about half a pound.  Isn’t he sweet!

My other new grand nephew, Ryan.  He is eight weeks old.  Also a cutie! 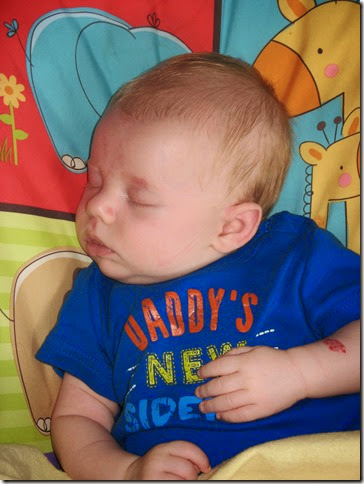 Grandson caught his first fish all on his own this weekend. 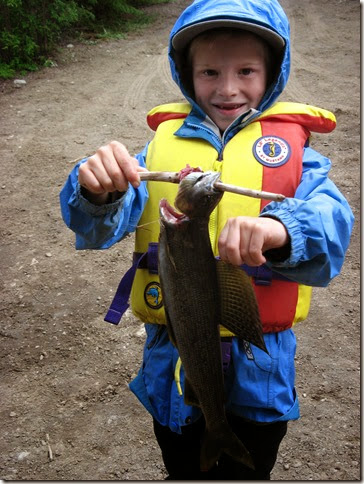 And granddaughter is learning how to make friendship bracelets. 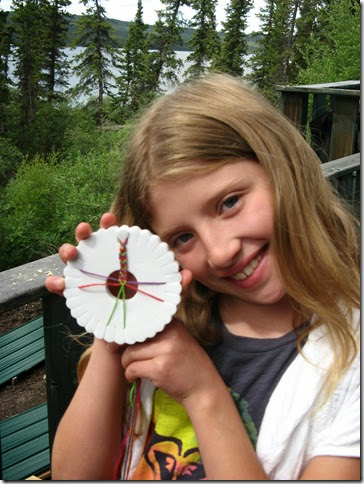 And the birthday girl in far-off Newfoundland finally received her birthday postcard! 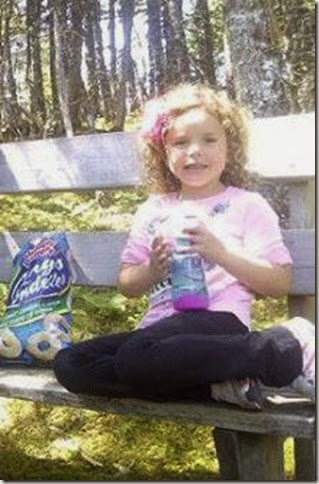 I DID get a package in the mail this week!  How fortuitous!! 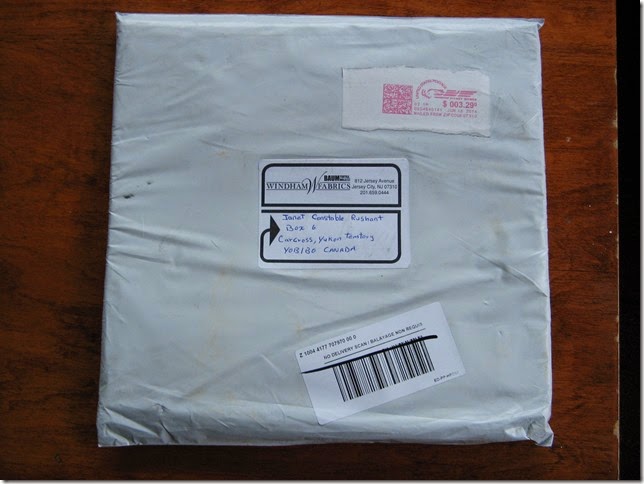 This is not a very exciting looking package.  Dull grey – the only colour is the pink on the postage meter slip.  And it is wrapped in plastic.  What’s with everything being plastic these days? So unappealing.  What happened to brown paper and string?  So much texture and old-fashioned goodness in that.  The only thing really interesting about this package is that it only cost $3.29 to come from New Jersey to here.  I paid more than that to send a LETTER to Australia last week!

But then I got to open the package….  Oh, lookie here!! 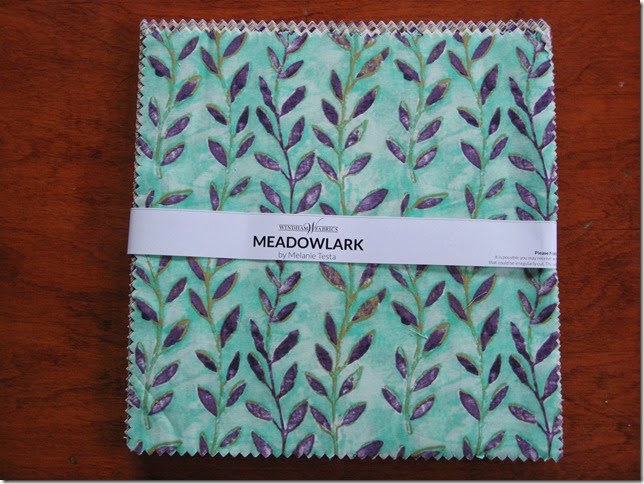 I won this lusciousness from Chris at Made by ChrissieD in a Meadowlark blog hop back in June. Thanks Chris!!  I have linked you to Chris’ post for the hop so you can go and see what she made from this fabric.  I just love her table topper!  I am not sure I have enough fabric here to copy it, but maybe something similar.  A view of some of the different fabrics. 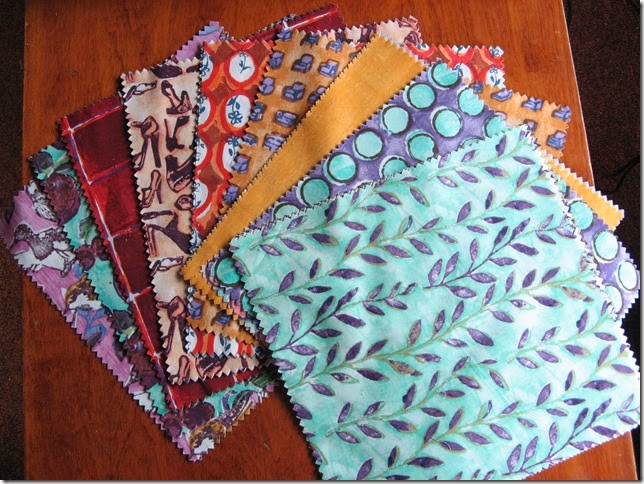 I’m linking up with Shaz at Alsha's Space.

I love Friday Night With Friends and Friday Night Sew In because once I sign up I feel like I have made a commitment and I actually get some sewing done!

Last night I made these blocks for Nolene in the Paper Pieced Swap.  They were supposed to be done by the end of June…. I started making a block one day last week but totally messed it up and decided I was too tired to concentrate.  But they are done and in the mail now…. only four days late… 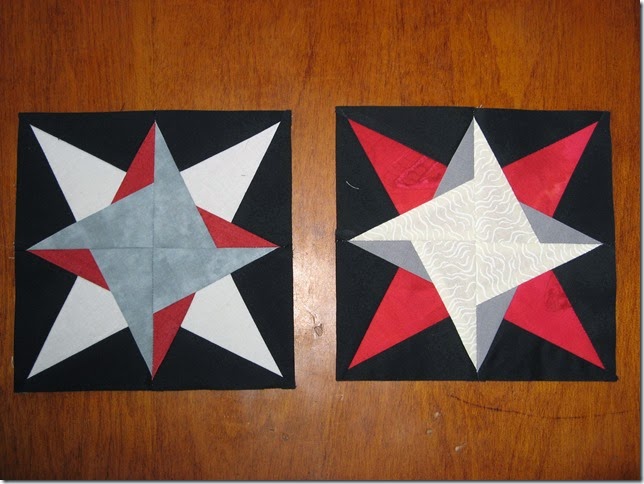 I hope you had a productive Friday Night With Friends!