Earlier this summer my friend Dahn called me excitedly saying she had something for me.  Dahn knows I love scraps and she abhors them.  She had been promising to bring me her latest round of scraps for my postage stamp quilt so that’s what I thought she had.  But this was something she found in the garbage….and even she could not leave it there.  It was a huge bag full of hexagons that someone had cut out.  Many of them were basted onto paper backing.  She just knew that I would do something with this and she couldn’t let it go to the garbage.  And she was right.  I took it home and sorted all the hexies into piles of the same fabrics.  It took me hours. 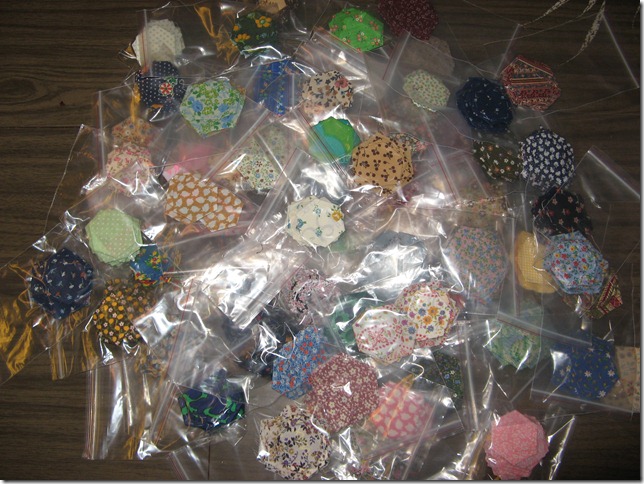 There are many little hexies here, some basted and some just cut.  As well there is some leftover fabric. 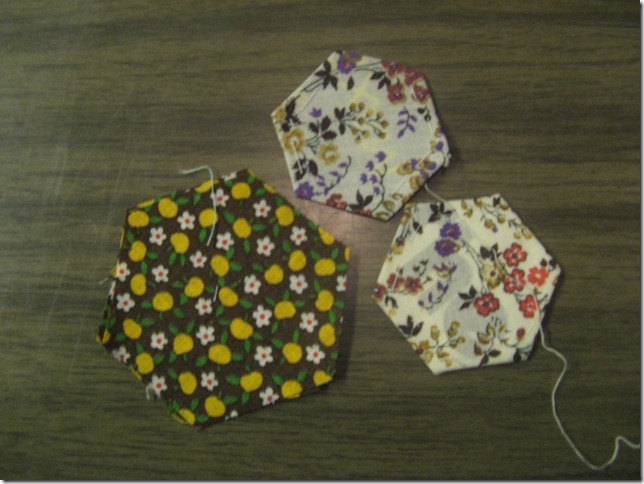 I keep seeing One Flower Wednesday on different blogs and thinking I should start working on the hexies but I haven’t started yet.

DD #2 is here visiting from Newfoundland.  It’s been great to see her as it’s been over a year since she left.  She works as a paramedic just outside Saint John’s.  She has downtime on her job and does a lot of knitting.  I mentioned before that she inherited my mother in law’s unfinished knitting projects.  One of those was a sweater for the youngest son.  He is a big man and it is a big sweater.  DD # 2 has finished it and is in the ‘sewing in the ends and sewing it together’ stage.  She brought it with her to work on as well as a pair of long overdue Christmas socks for her cousin.  She has those done and has decided she will give her uncle the sweater for Christmas so she still has time to get it done.

DD # 2 loves the quilt I’m making her.  I had started a different quilt long ago and she thought I was finishing that one – hence the surprise element and why I haven’t posted photos.  It is almost done, just finishing the binding and you’ll get to see it soon.  But DD # 2 commented that SHE should make a quilt.  She doesn’t really sew but she does have time to work on things and she’s a smart cookie.

SO….can you see where this is heading….I suggested maybe she wants to sew together a few hexies…..  At first she asked if I was crazy, but then she got engaged.  She’s made these two already 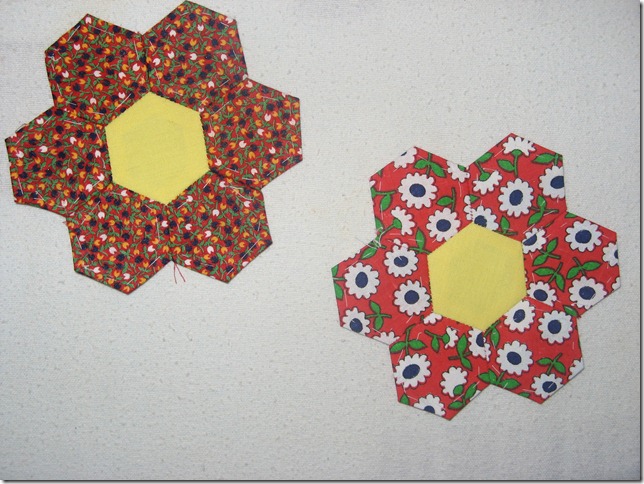 and she’s taking the rest of the pile with her.  She’s cut a stack of the yellow hexies for the centers and basted them onto paper backing.  She’ll mail the finished ones back to me as she gets them done.  What an inspiration!  These are very old fashioned fabrics and I probably wouldn’t have picked them but I think they will look very pretty.  DH said maybe this quilt could be for Zeke, our dog, as the poor guy was shivering in the boat yesterday.  Zeke needs a sweater and a quilt but I don’t think he’ll be getting this hand stitched one!