Very busy around here this weekend.  My oldest daughter Jessie was part of a tight threesome while growing up and one of the three got married.  At her grandmother’s traditional camp down the lake about 5 miles from town.  Our house was a jumping off point for lots of their friends and there was traffic steadily through here on Friday and Saturday morning.  The wedding was at 3 on Saturday afternoon.  The weather was cold and blowing but the sun came through for the ceremony.  The whole event was beautiful and went splendidly considering the mix of cultures, the blending of two very large, already blended families and the work to have an event like this at a remote location.

Some pictures for Laina, my daughter who couldn’t be here. 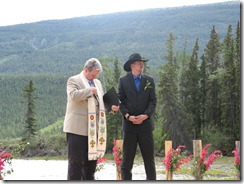 Stewart, who did the service, waiting with Ben. 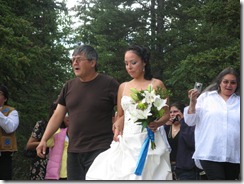 Cindy and her dad

The bridesmaids. (My daughter Jessie fourth from right.  Vanessa, the third of the trio on the right.) 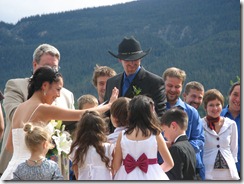 Cindy high-fiving Arlo (her son) after he dropped the ring but it didn’t go through the cracks in the wharf.

Lacey Scarff drumming and singing a traditional song.  She is a powerful and beautiful singer. 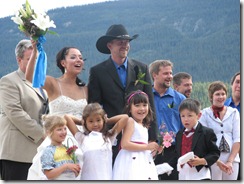 We did it! (Laina, notice how Ella (my granddaughter) managed to be a flower girl!) 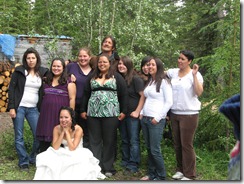 Cindy with her eight sisters (one step, two full, four half and one adopted cousin) and her step-dad.  Cindy has four brothers.  Ben has five sisters and three brothers.

We babysat our two grandkids and another little boy Saturday night and most of Sunday, then went back to the camp for dinner on Sunday, and a bit of fishing. 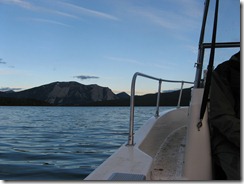 This is the beautiful place where I live!

In other breaking news:  We had a sow and cub black bear in the yard two days last week.  They seemed to be interested in the spent grain we feed the chickens.  Sadly two bears matching their description were shot by game branch on Thursday as they were also roaming in Choutla subdivision.

Not much sewing this weekend, but I got a nice bit of fabric in the mail: 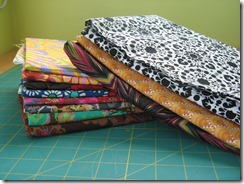