I’ve been sick as a dog – well at least as sick as my dog.  I’ve had a horrible flu this week that has kept me in bed since Tuesday.  I’m just up and around a bit today; enough to water the garden and write a post.  My dog, Zeke, got hit by a truck on Wednesday evening.  He is a stray I acquired when he was about a year and a half old and I’ve had little luck in getting him to shed his habit of chasing trucks.  Not cars, just trucks.  Not semis, just pickup trucks.  And if they have writing on them he is more likely to chase them.  On Wednesday he got away from my hubby while on a walk and the dreaded happened.  Fortunately he was only damaged on his two front paws and one of those was just scraped and bruised.  He had to have surgery to repair the damage to the other one.  So we’ve both been sleeping all day and dutifully taking our antibiotics. 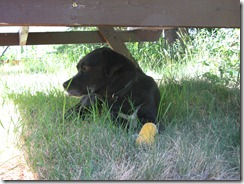 I guess it was too hot in the sun so he moved under the picnic table.  I won’t show you any pictures of me in my weakened state. :)  Here’s a picture instead of the nice bouquet of wild flowers my hubby picked me. 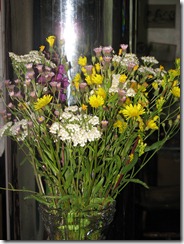 I really enjoyed reading Kelly's update today about the mission to take sewing machines into Africa. I read one book this week while I was sick, Baking Cakes in Kigali by Gaile Parkin.  It is a sweet novel, set in Rwanda, of one woman’s quest to make things better in her world.  In it sex trade workers are being taught sewing skills so they can earn a living in a safer way.

Back in May, when for some reason I thought I wasn’t busy, I offered to test a pattern for Amy at Kati Cupcake.  It took me forever to get it done, first the pattern took about a month to arrive and then things were crazy busy (amazing how it can change in a few weeks!).  However the finished dress was in a size to fit my granddaughter and I gave it to her to wear to the wedding (see the previous post).  This was a good move because when her mom went looking for a bridesmaids dress, Ella insisted she had to have a new dress as well, and was upset when mom wouldn’t buy her one.

Before I show you the dress I have to say that this pattern was easy to follow and fit together well.  I would definitely buy one of Amy’s patterns, only she sent me the whole batch of  them as a thank-you for my doing the test!  Pretty overwhelming generosity!  The Girly Girl one on the top is what I’m going to try next. 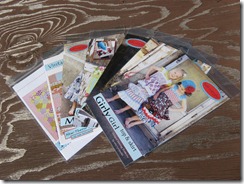 Anyway here is the dress.  The pattern is called Molly Mae.  There is an insane amount of gathering in this dress, which is what makes it.  There is also shirring using elastic thread, something I had never done before.  I love it and will definitely try it in the future.  The fabric is Sunshine by April Cornell which I managed to get on sale in Rushin' Tailor's in Skagway.  I wish I hadn’t put the yellow bodice on.  My plan was to put trim on it, but with the shirring it would have been complicated and Ella said she liked it as it was. 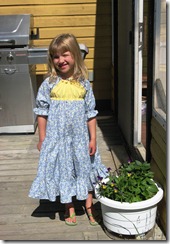 I’ll have to get better at this picture taking business I can see.

After the wedding, my daughter and her kids stayed at the camp for several days.  When they came in on Wednesday evening Ella was still wearing the dress, with a pair of bright yellow rain pants underneath and her pink ballet slippers.  And the dress was filthy! Too funny.  Unfortunately I was too sick to think of taking a picture.

What I liked most about today was seeing the birds playing in the pools of water in the garden when I was watering.