Day 2 at the Coast

The morning air was filled with the shriek of birds.  My sister Susan said “I woke up when that bird was yelling “food, food”.  And indeed these birds, rainbow lorikeets, are the loudest birds we’ve heard.  Unfortunately I haven’t got a photo of them yet, but I will.  We had another dip in the waves on a different beach.  The waves here were rougher and more chaotic, but I took the boogie board out and had a couple of good rides.  It is definitely quite the workout too!  I’m not in this photo because I was snapping the camera, but I could have been. 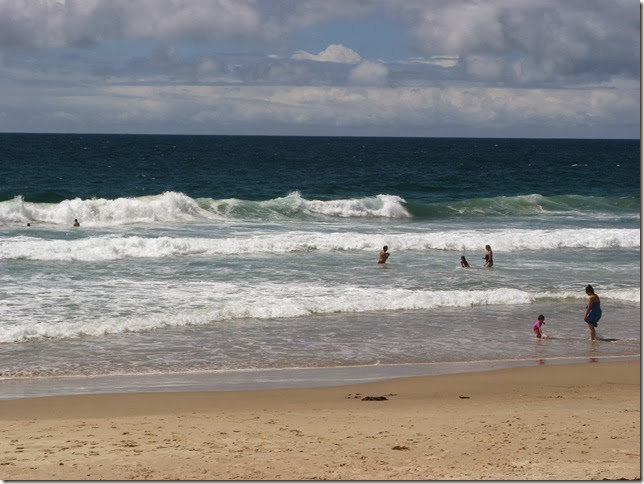 After we headed to the rainforest walk and had lunch at the restaurant there.  I ordered a smoked salmon Caesar.  Geoff had his second round of fish and chips – we had them for lunch the day before.  My salad came and I had a couple of bites, declared the salmon delicious, then noticed a long hair sticking out of the opposite side of the plate from where I had been eating.  When the waitress came by I said to her “there is a hair in my salad”.  She responded “What kind of hair?”  I must have looked confused because she then said “Is it light or dark?”  I said “It’s right here, so you can decide for yourself” and pointed it out to her.  She took my plate away and came back about five minutes later.  At that point she apologized about the hair and said they were making me another salad.

The rainforest walk was fascinating!  So many different plants and trees.  I recorded and remember a few of them.  Since my friend Dahn was interested in palms, here is the Walking Stick Palm… 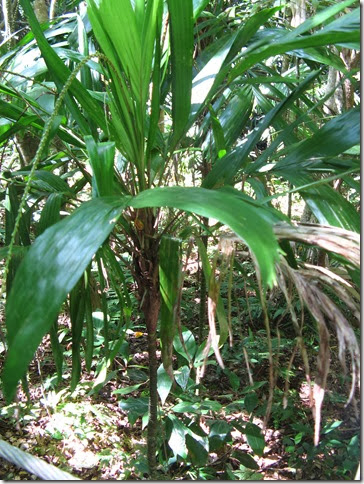 And the cabbage palm…. My favourite tree is the amazing Fig Strangler.  A seed for the plant alights in a branch of a host tree.  From there it puts down roots to the ground and grows branches above.  The fig doesn’t eat off the host but gets its own nourishment from its roots and branches, but eventually it does smother its host tree. 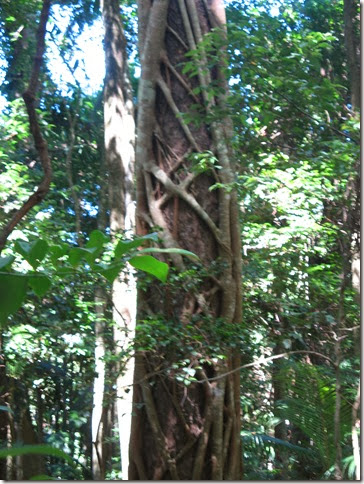 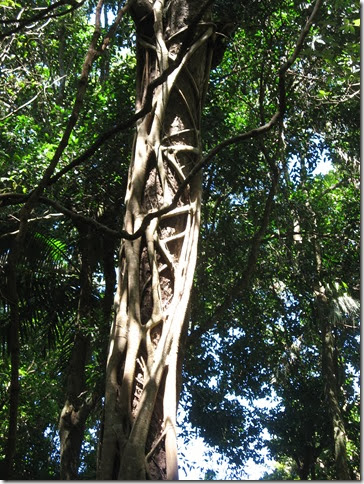 These trees were just beautiful.  There were also other plants which grew on host trees, again finding there own nourishment but perching on the other tree. 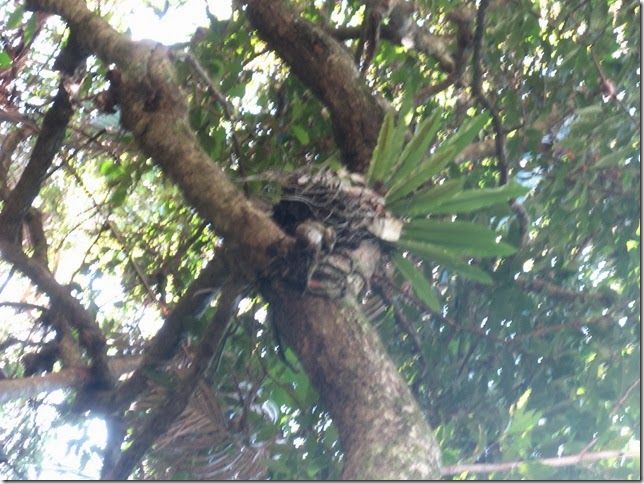 Not the best picture but you get the idea.  The biggest excitement of the outing was the goanna which climbed a tree two feet away from us.  Again not the best picture.  He was moving fast and I was too excited to think about focusing… This fellow was about two yards long… 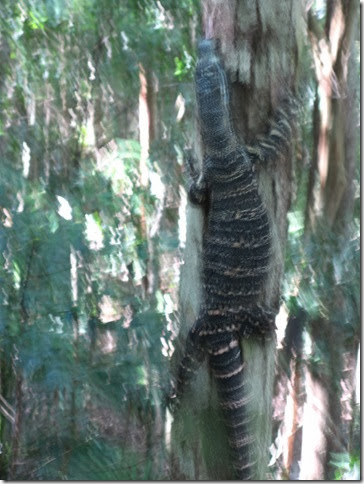 Here we are having fun in the rainforest walk… 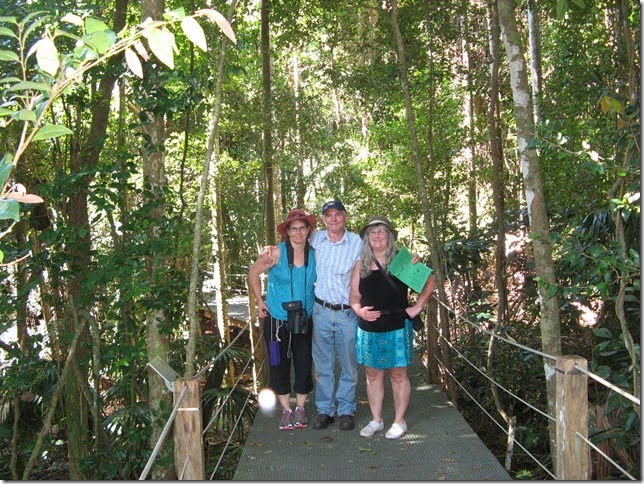 Next we took a dinner tour in the harbour and river on a Chinese Junk.  And ate fish and chips.  The fish this time was perch and was grilled and it was my favourite so far. 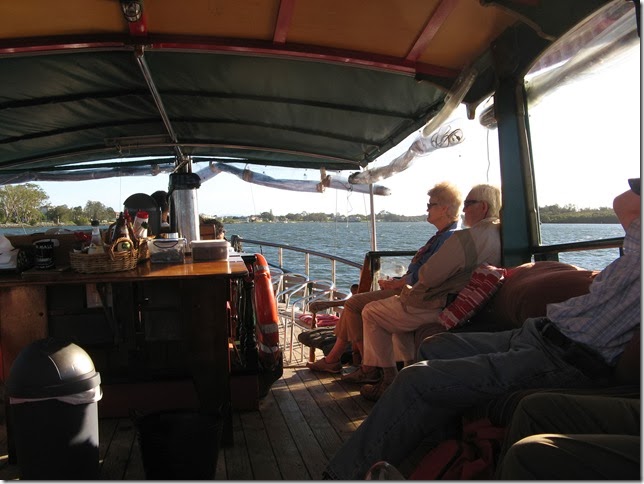 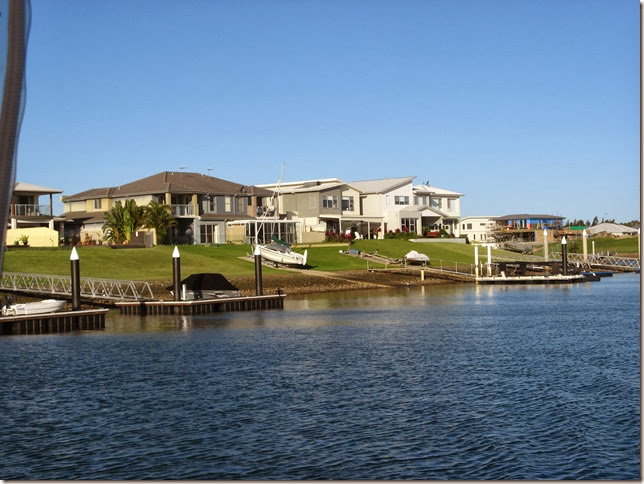 We saw dolphins in the harbour on our return trip but no pictures… they are much too quick.  Next was a stroll along the path on the water’s edge.  This bird captured our attention for quite a while…. a little Sherlock…. 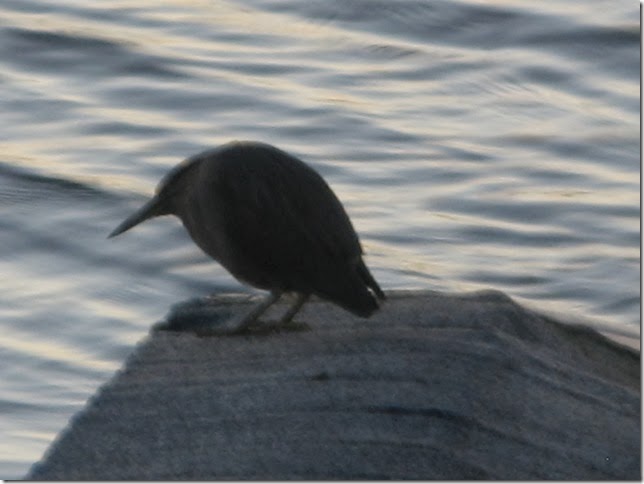 We eventually decided he is a Black Bittern.  We have spent lots of time with the bird book on this trip.  So many new birds to identify!

The last excitement of the day was when cloud after cloud of bats flew overhead.  The show went on for about half an hour. We spoke later to a bat expert who told us these were blue-headed, black-headed and red-headed flying foxes, heading out to sea to feed.  Spectacular!  I slept well at the end of this day. :)