After my trip south I came home and worked for two and a half days, then was off to the “no snow” quilt retreat in Haines Junction – where we had about six inches of snow!  There were 33 ladies at the retreat, mostly from Whitehorse, but four came from Haines, Alaska, one from Idaho, one from Yellowknife, NWT and me from my small town.  We were there for four days.

My friend Dahn, who has a big heart and is always offering to do things for people, gave us an unscheduled mini workshop on snow dying (after she called her DH and got him to bring out all the materials she needed to put it on).  She is passionately into dying and prepares a lot of the fabric she uses in her work.  Here are the pieces I made. 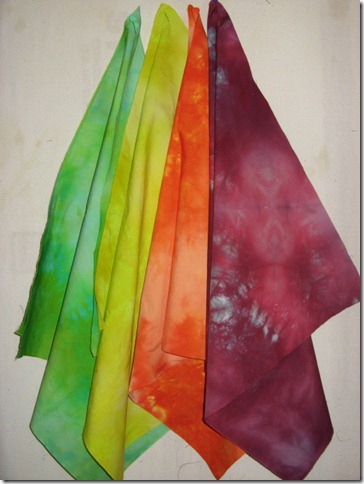 I love the yellowy green.

There was a gift “exchange” where you could steal from someone else or take a new gift.  I ended up with a fabric panel of quilt sayings and a suction handle to use on rulers.    There was also fabric door prizes and again you could steal or open a new one.  I came home with these lovelies although I lost them a couple of times in the process. I also came home with a huge bag of scraps that people donated for my scrappy postage stamp quilt.  I have so many scraps that I’m going to have to come up with another quilt idea once that one is finished!  Some of the scraps were LARGE…I pieced together this unstuffed pincushion from some of the scraps. 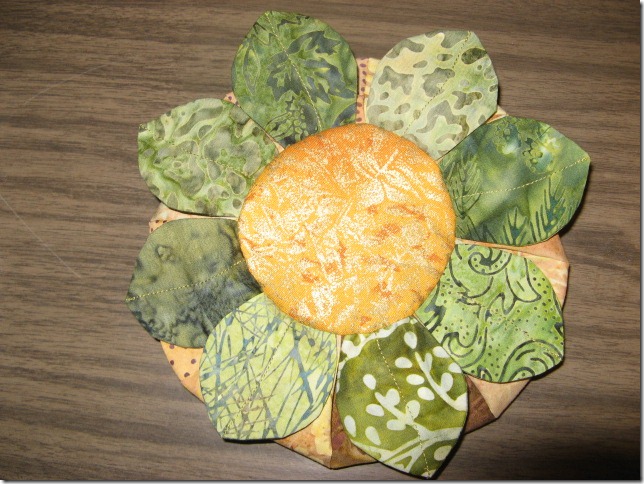 And this is what else I worked on:

A setting for my bluework squares. 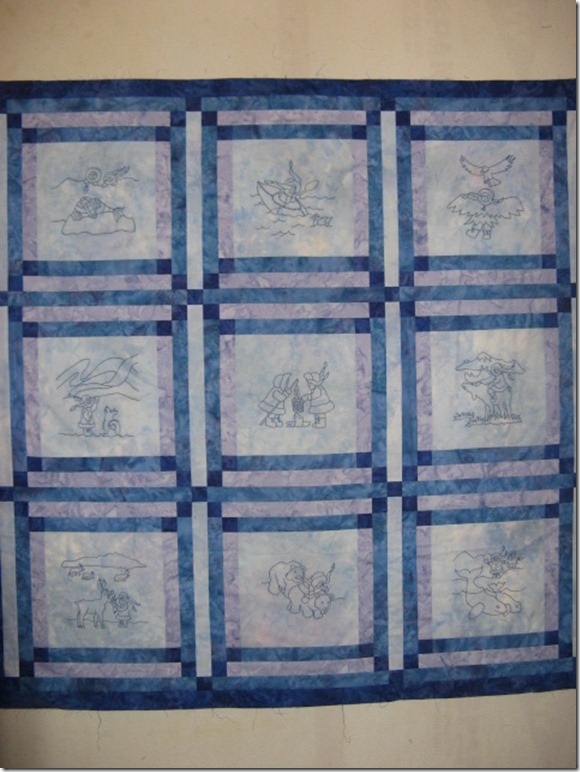 Second border on this quilt that I made a couple of years ago and need to finish.  It is for a friend who ran a marathon with me – in February, in the Yukon, on the Yukon Quest sled dog race trail.  The quilt is a representation of the many hours we spent training; running in the snow amongst the trees. 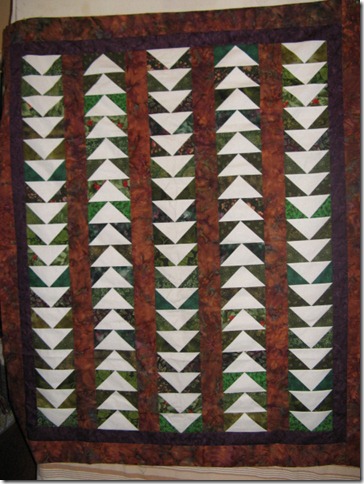 I also worked on the quilt for DD # 2 – it’s 2/3 quilted.  Yeah!… but, she arrives tonight at midnight and it won’t be completely finished.  I’ve got until October 10th when she leaves to get it done.

It was a fun weekend!  Now I have to stay home for a while.  Although I am taking next week off work….and maybe we’ll go out in the bush with DD # 2, hunting or berry picking or maybe a drive to Skagway… Hmmm…..