This morning we set out south from Halifax to visit beautiful Peggy’s Cove.  As I worked for eight years in Victim Services in the Justice system, it was important to me to stop at the memorial for Swiss Air flight 111 which crashed into the ocean five miles from Peggy’s Cove in September 1998 killing all 226 people on board.  Although I never worked on a disaster of this magnitude while with Victim Services, I did attend the landing of a diverted Korean Airlines 747 into Whitehorse airport on 9/11.  You can read the full story here if you’re interested.

There are lovely patterns and prints in this simple yet elegant memorial. 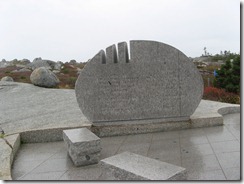 And another block that I finished up on my daughter’s new sewing machine before leaving Newfoundland.  My October Adventure Swap block for Dawn in Kentucky.  It is off in the mail winging its way to her. 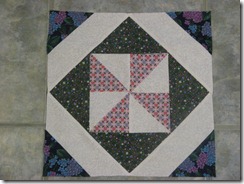