We are at the farm where DH’s mother grew up.  His cousin lives their now – and his cousin’s daughter who will one day take over the farm.  Carl raises Black Angus cattle.  He is in his seventies so his herd is smaller than it used to be.  His cattle are quite tame.  He visits them in the field and they come to him.  He believes that calm cattle make better meat and I can attest to the fact that the beef he eats is delicious!

These cattle still have a touch of the Hereford stock that he had on the farm at one time. 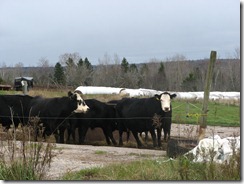 We are staying with another cousin who lives a few minutes up the road.  This pretty quilt is on our bed.  It is a whole cloth quilt with the design printed on it but someone has gone to the trouble of hand quilting it following the lines of the design. 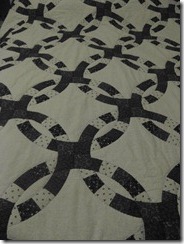 No, it’s not really black and white, it is done in blue, white and a burgundy red, but heck I didn’t have anything in black and white to put up for today. 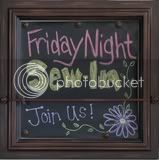