I know I’m a day behind – I’ll hopefully catch up  tomorrow.  Here is a beautiful orange sunset …. 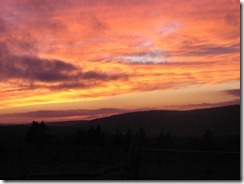 This picture was taken in Harbour Grace, Newfoundland.  Here is some information about this town.

In 1610 a pirate by the name of Peter Easton made it his home base.  He is buried in a little graveyard in the town which looks like it could be featured in any horror film.

In 1932 Amelia Earhart left from Harbour Grace’s airfield on her solo voyage across the Atlantic Ocean.

Capt. Eddie Rickenbacker (aka Snoopy) also flew out of the Harbour Grace airfield.

There is a sailing ship, the SS Kyle, grounded on a shoal in the harbour.  It has been there since 1967.

Here is an orange quilting photo.  The back panel for my Mouthy Stitches bag. 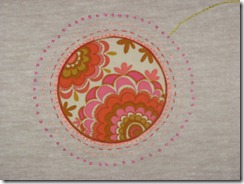