I guess the moose realized they were NOT DONE with my garden because when I arrived home from work this afternoon there they were polishing off the morsels that they missed in the cold frame, and then they fed at my trough of flowers. 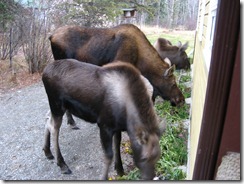 I took this picture from the front stoop – which you can see the edge of in the lower right of the picture – literally three or so feet away from them.  They were there for five minutes or so apparently not noticing me, then one of the calves looked at me and made a startled movement.  Then they slowly trotted to the back yard.  This photo gives an idea of how big this animal is…as she towers over my car.  She didn’t want to miss the petunias in the pot. 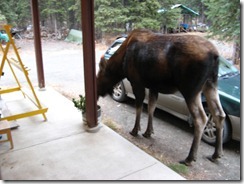 My colours quilt is also NOT DONE, but the top is!  I finished it while at the retreat a couple of weeks ago and I am thrilled with how it looks. 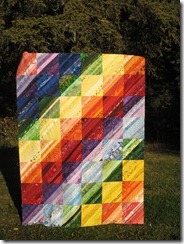 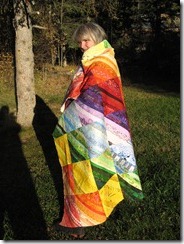 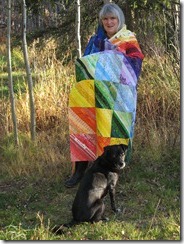 Zeke likes it too.

I am thinking of not putting any batting in it as it is quite heavy already with the muslin foundation for the blocks.  Any opinions on that?  I will still put on a backing and quilt it.