Our local quilt store hosts two big quilt retreats a year in the Village of Haines Junction, about three hours from my town.  Last weekend was the fall one and, yes, I attended. 😃 The retreat runs Thursday through Sunday, so there is lots of sewing time.  As well there is tons of good food.  Jonathan, our cook, comes 1,400 km just to cater for us.  And a group of us put on a pre-dinner cocktail hour with good cheeses and other delicacies, that he loves to attend as well. 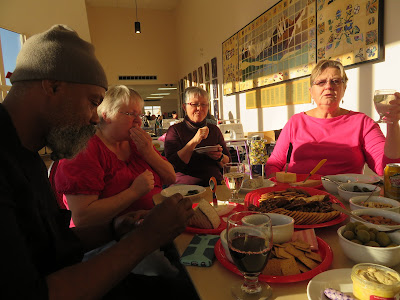 But I guess I should tell you about the sewing... I made my September swap hexies for Jacqui and got them into the mail on Friday. 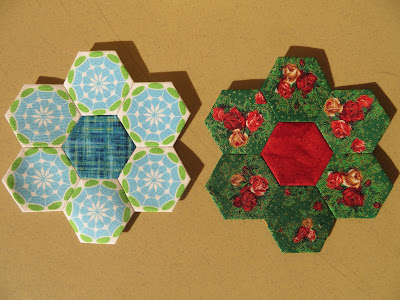 When I was gathering up my pin cushions for the parade a few weeks ago I found yellow pieces that I had cut to make a block.  So I put them together. 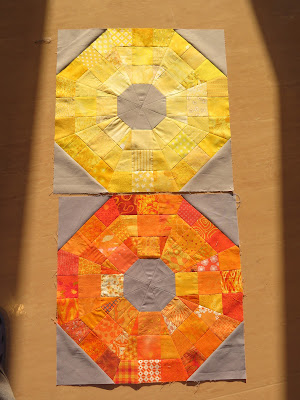 I had made the orange block last year sometime.  Eventually I want to make more of these blocks and put them into a quilt.  But they are pretty complex - one block takes about four or five hours to make, what with finding the scraps and cutting the pieces etc.  So this is a project for later.  This block was designed by Elizabeth Hartman and can be found by clicking on the link.

I have been wanting to make myself a new tote bag and really love the shape of a bag I made last year.  My blue scrap bin is overflowing, so I decided to make this a blue scrappy bag and I made a larger size.  I still have to find grommets that will match with it to put the handles through.  So right now it just looks like a lump. 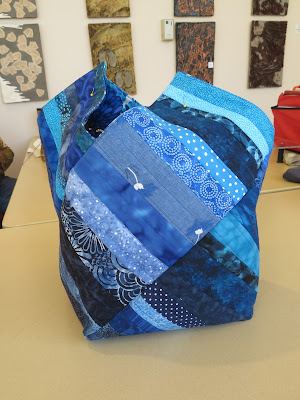 And the pièce de résistance - I now have twelve En Provence blocks done!  Only four more to go. 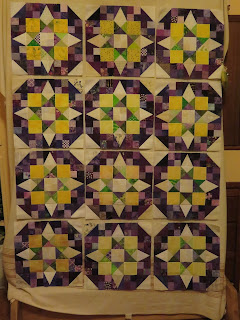 There were tons of beautiful quilts being worked on, but I only took a picture of one.  Of course I want to make this quilt pattern!  Isn`t it fantastic! 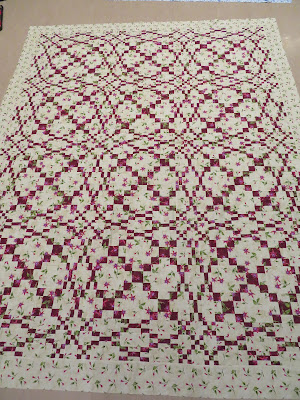 You might think I would want a little break from sewing - but it is Friday Night With Friends coming up this Friday and I have my name on the roster.  Why don`t you come along too!!