Last week that is…  It started out on Monday night when I saw a fat mouse run down the hall in my house.  I HATE mice.  They give me the heebie jeebies and I have been known to actually scream at the sight of one.  And I am NOT a squeamish person.  I won’t give you all the details; suffice to say that it took four days, three mouse traps and three assistant mice hunters to catch the mouse.

The catalyst to solving the problem was on Wednesday night when I went out to visit my hubby at the place he is working.  I managed to lock my keys in my car.  This is an hour away from any professional service that could open my car for me and would cost probably about $200 to get them to drive out there.  And it is two hours from my home where my spare key was.

On Thursday DD # 1 kindly drove to my house to pick up my spare key and while she was there sought out the missing mouse traps (yes that mouse had dragged them off from where I had set them, but was not caught!!).  She reset one of them by the door and voila!  On Friday morning there was the mouse in the trap.  Another assistant had to come in to remove the mouse and trap for me.  Ugh!!

On the weekend we had a quilt retreat right here in my home town.  It was an international event with three ladies from my town, two women from Whitehorse and four women from Alaska attending.  And one of those ladies from Alaska is actually from Kansas.

Then on Sunday night we got word that my nephew’s child had been born.  His girlfriend, Christina, was due in September.  The baby is 10 weeks early and weighs 2 lb, 15 oz.  His name is Julien Thai Nann-Constable.  He will be in hospital for at least two months.  He is beautiful and perfect, just much too small.  His grandparents, my brother and his wife, ask for prayers from near and far for the baby, his parents and the rest of the family.

This week I have my two grandchildren visiting for the week.  We spent four hours at the swimming pool yesterday and we all slept for about ten hours last night.  Their two dogs are here as well, although my little pup is away with hubby.  We are off to take them for a walk once I say the word.  Right now the kids are making things with little elastic bands.  It is called Rainbow Loom and these two will spend hours making things.

Some photos from the retreat… 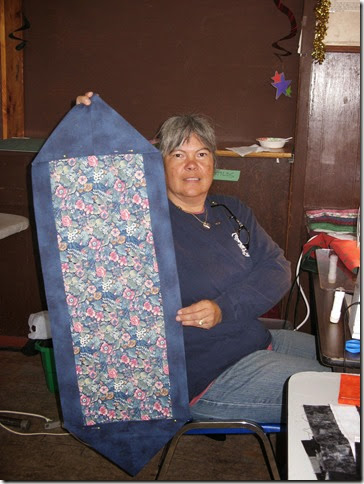 Anita, who was making 50 or 60 table runners for her mother’s headstone potlatch. 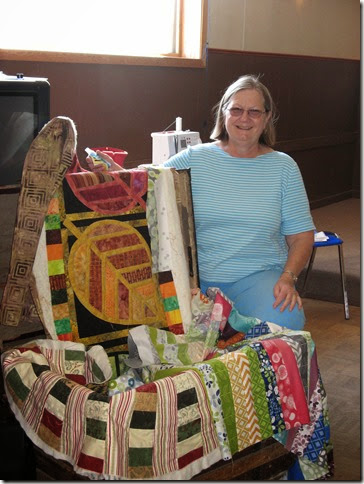 My friend Linda with her amazing trunk display of her work. 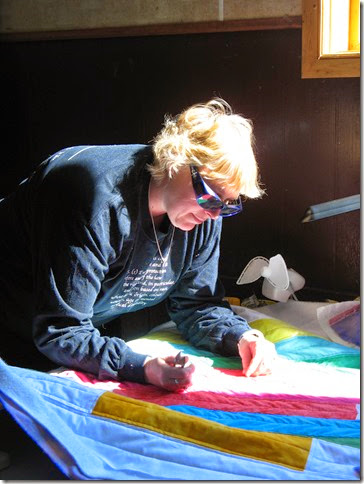 Dahn whipped up two baby quilts over the weekend.  Here she is enjoying the sun. 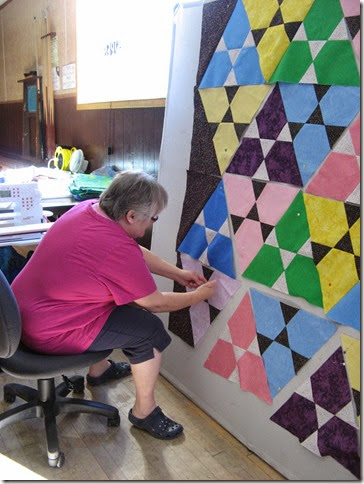 Louise was frustrated with the quilt. She kept sewing the triangle pieces on the wrong way. 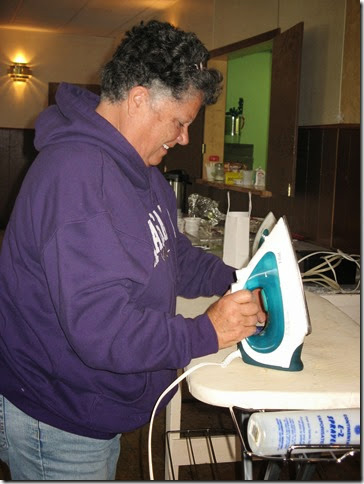 Diane is from Kansas and is in Alaska visiting her sister for the summer.  She isn’t a quilter, but she is an incredible good sport.  She pressed, ripped stitches, helped pin and fold, gave advice on colours and placement and had a great time. 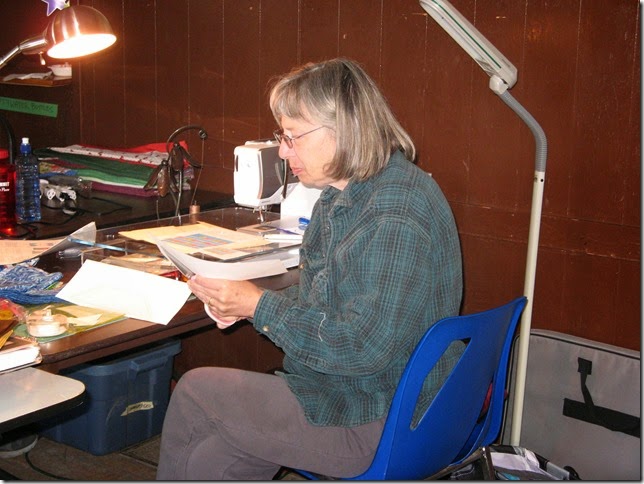 Lori plugged away quietly at her sewing.  I thought I had a photo of one pretty one she was working on, but…. no… 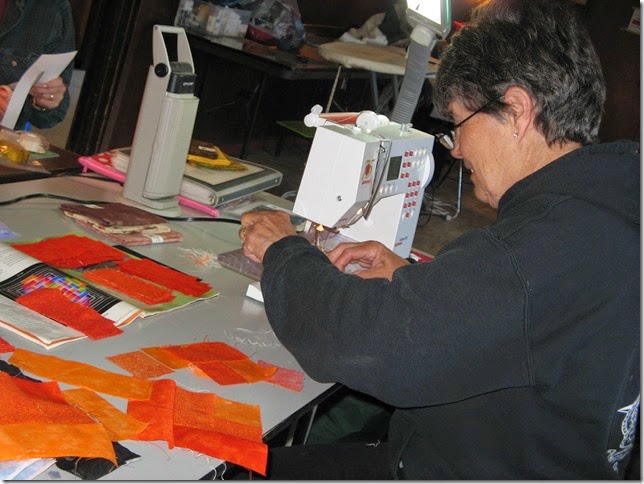 Linda was making an awesome colourful quilt.  She was missing a few pieces of fabric, but I was able to find what she needed in my stash. 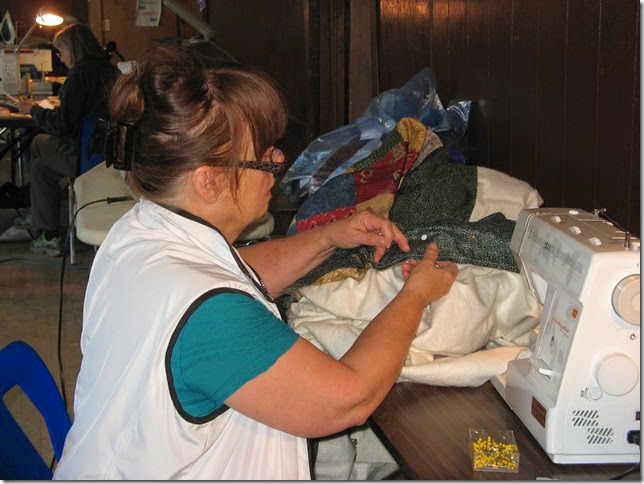 Dianne was only able to come on Friday and Sunday, but still managed to take two quilts to their end stages.

I worked on several things.  Borders for Easy Street… 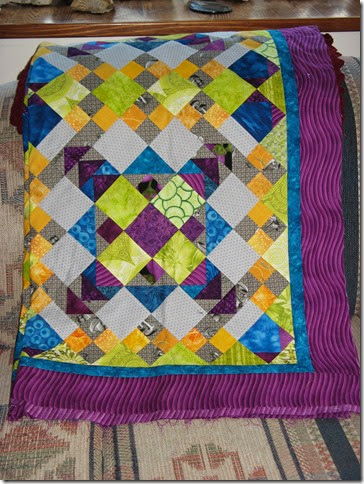 Some fmq on this quilt that I started working on before I went to Australia.  Eleven blocks left to do – six in this pattern and five in stitch in the ditch on the adjoining coloured blocks… 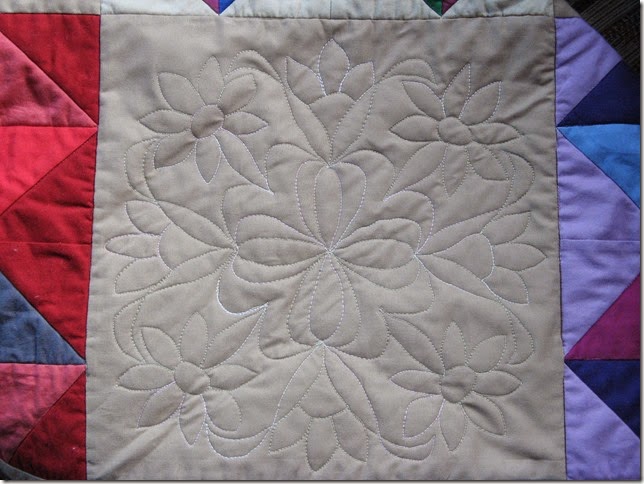 And I made this block for my June Canadians Quilt partner.  She wanted summery colours and no batiks… 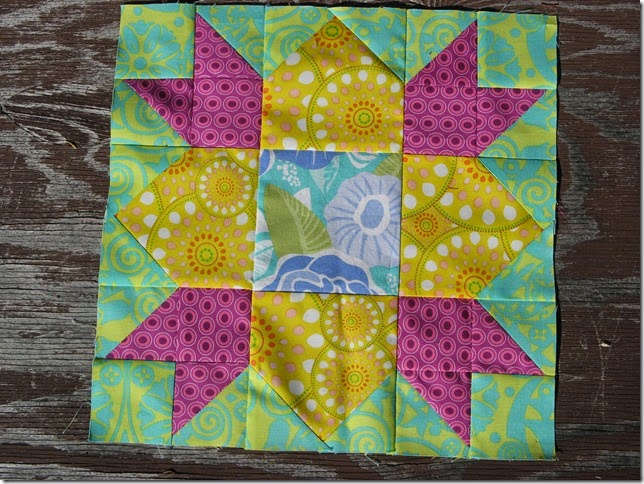 A display of some of our work… 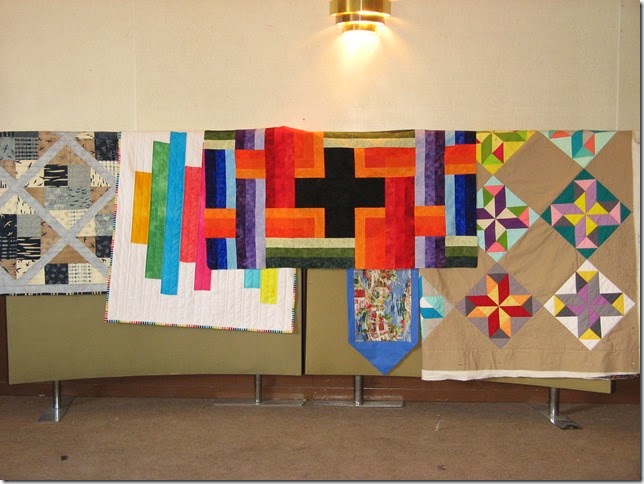 Hope you had a good week too!