The Year of the Finished Project February update

Lynne has posed these questions…

How did you go in January?

Well not so great…. I only put one thing on my January list and that was to finish the top of Easy Street.  This is how it looks today… 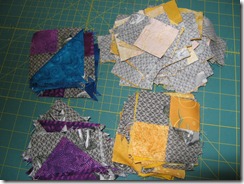 I haven’t finished any of the steps, although the four patch blocks are almost all sewn.  I have been doing them as leaders and enders, but otherwise I haven’t done a thing on Easy Street since I last posted about it on January 7th.

What did I do instead???  Well I worked on my swap items 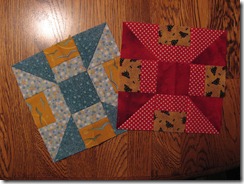 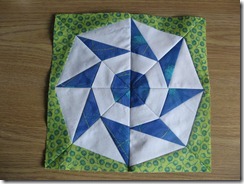 Simply Solids block swap – I received the instructions and the fabric but haven’t made it yet… It isn’t due until the end of February though so I’m okay. 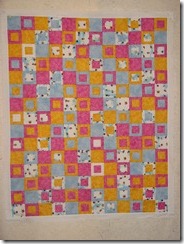 It is hard to see but it has a narrow white border.  I have to add one more border, then quilt and bind it.

What plans do you have for your UFOs/WiPs in February?
My swap items…

5. MMM Round Robin – starts in February & runs for six months

6. Simply Solids block swap – starts in February but we have our instructions already.  My month is September.

And can you believe I’ve joined a couple more…

7. Mystery Muse – two items – don’t have to be sewn, can be any genre – by the end of February reflecting the prompt “excitement”

8. Get your Hex On bee – Starts in March - a hand made hexie block of the person’s choosing.  My month is August.

As well I am going to:

Get my cardinal done

Today is my 60th birthday.  I’ve had calls from my three daughters, two grandchildren, a friend who is on holiday in Ontario and my sister in Nova Scotia.  My sister in Australia and I have e-mailed and will hopefully get to Skype tomorrow.  A ton of people have contacted me on Facebook, including my brother and sister-in-law and one son-in-law, and lots of friends.  DH bought me flowers, wine and some ski wax and is making me steak, potatoes, Swiss chard and turnips for supper. 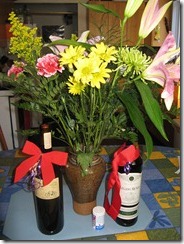 I told someone who asked that he wouldn’t spoil me but actually he got up early to take our granddaughter in to school and didn’t wake me up.  She was out here last night attending Qristina and Quinn Bachand's fantastic house concert with me.  And DH left me a thermos of tea on the counter too.

So I am somewhat spoiled.  UNFORTUNATELY, he has also passed on his stomach flu and I am feeling very lousy today.  So much so that I’m not going to my 2nd cardinal class which is tonight.  I will be going to class # 3 on Monday though, whether I feel better or not!

Email ThisBlogThis!Share to TwitterShare to FacebookShare to Pinterest
Labels: The Year of the Finished Project