FNSI was not as productive as I’d hoped it would be.  I wanted to get all the blocks for DD # 2’s quilt completed so I can get the layout done.  I’m going to a retreat next month and joining all these blocks is going to be top of my list to get done while there.

I sewed ten blocks and fixed the one block I’d sewn together wrong. 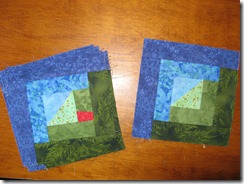 I still have fifteen blocks left to sew.  I’m hoping to have a really productive sewing week as DH will be away for part of it – so no cooking or having to be a sociable wife… I like an occasional short break from those two things…

Email ThisBlogThis!Share to TwitterShare to FacebookShare to Pinterest
Labels: Friday Night Sew In