We’ve made it through Ontario; a province of many contrasts.  My impression for this trip was of trains and trees.  Oh, and hockey.  Many Canadians love hockey.  And we don’t just watch professional hockey, we play it in one form or another as well.  Some people play on recreational leagues, or old timer’s leagues.  A lot of people just play “pick up” hockey; playing on a backyard rink with whoever is around.  Lots of people make rinks in their yards, or on the local frozen ponds. 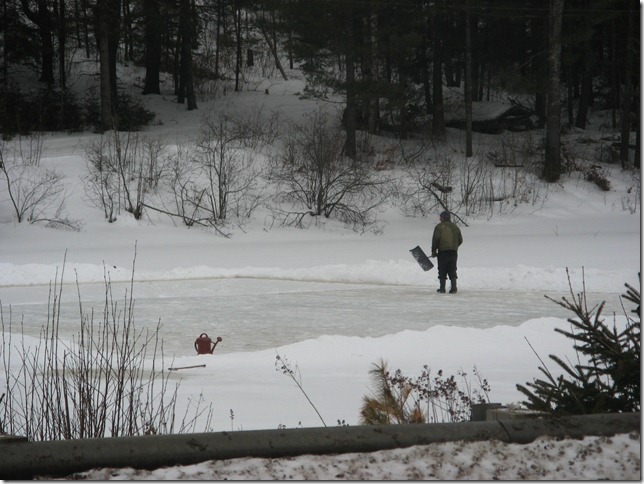 Notice the watering can…. that’s for smoothing out the rough spots in the ice.

We took the northern route around the great lakes.  The southern route runs along the lakes and there is beautiful scenery, but it has many twists and turns.  The northern route goes up and around through the bush. I’d never been this way before so it was interesting to see a new area.  The road is mainly flat and straight and the view looks like this for miles and miles. 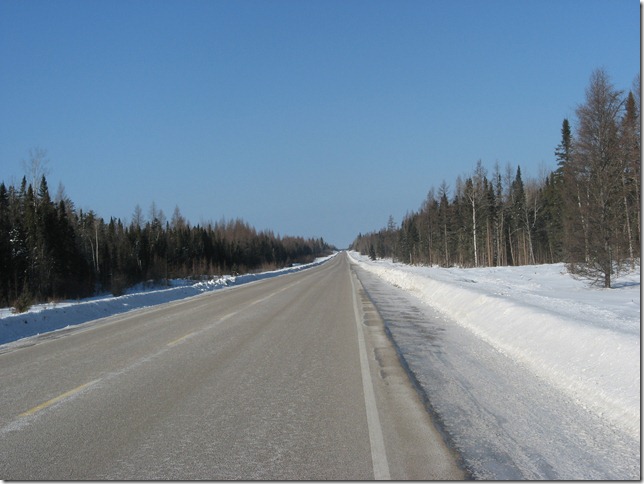 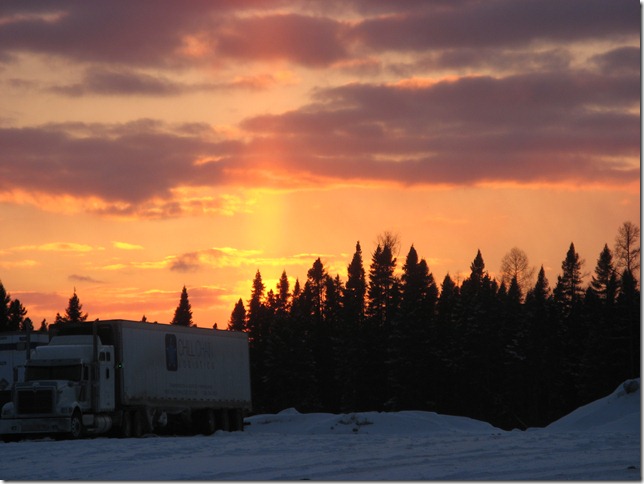 We stayed one night in Cochrane, Ontario.  In Canada there is a chain called Tim Horton’s.  It is a coffee and donut place, that also has bagels, muffins, sandwiches and soup.  Canadians love Tim Horton’s (Timmy’s) and the shops can be found everywhere.  Tim Horton was a professional hockey player in the NHL (National Hockey League) and he started the coffee shops when he retired.  He was from Cochrane, Ontario.

Cochrane is just a couple of hundred miles from James Bay – polar bear country.  In Cochrane they have two polar bears in captivity.  We didn’t go to see them  but maybe we should have as I’ve never seen a live polar bear before.  There is a stuffed, mounted polar bear in the Inuvik airport, which I went through regularly for six years for work.  It was huge.  It was standing up and it’s head brushed the ceiling.

The polar bear is Cochrane’s mascot.  Many small towns in Canada have mascots and large statues of their mascots.  We’ve see giant blueberries, lilacs, sasquatches and more.  This town didn’t claim the snowman as it’s mascot, or announce that it was the home of the largest one, but I haven’t seen one bigger. 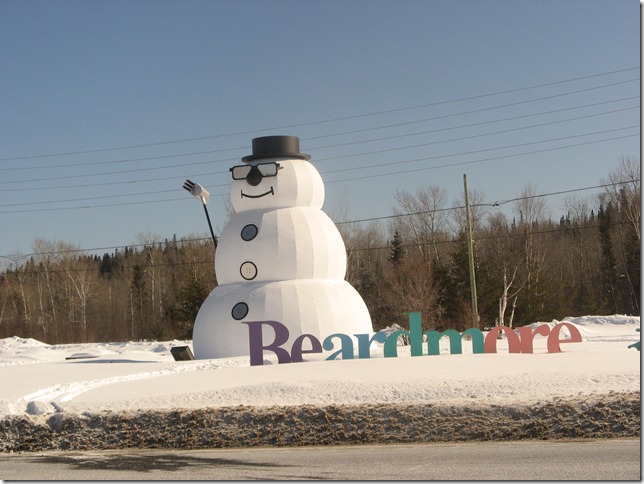 I didn’t get any pictures of the beautiful lake country in Ontario.  Or the Terry Fox monument.  Terry Fox was a young man who lost a leg to cancer.  He wanted to run across the country to raise money and awareness about cancer.  He made it from St. John’s to just outside Thunder Bay, Ontario, when his cancer returned and he had to stop his run.  He died shortly afterward.  Such a courageous young man.  There is an annual Terry Fox run in Canadian communities to raise money for cancer research.

We passed the longitudinal centre of Canada yesterday, between the Ontario/Manitoba border and Winnipeg.  Since our destination is about 500 km short of the westernmost point in Canada, I would say we are well over halfway!  Leg 5 – the Prairies.