Leg 3 of the journey

We have successfully finished the third leg of the long trip.  This mainly involved getting out of New Brunswick, which we did with a vengeance today.  We left Nova Scotia on Sunday but travelled only a short distance to New Brunswick.  DD left me at my Aunt Sylvia’s home, then went off to PEI to see her friends there.  I had a lovely 24 plus hours with my aunt, cousin Lee and her husband.  Lots of snow at their house. 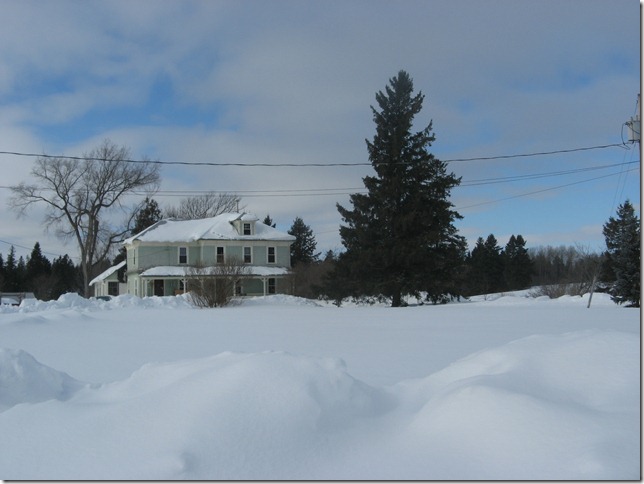 My aunt had just finished transcribing some taped interviews with her sister, my Aunt Cecily, who has been deceased for more than ten years.  It was fun to read her stories and talk with my aunt and cousin about the family.  I discovered that my mother was stationed in Newfoundland during WW II.  She was a nursing sister.  I also found out that my triple great grandfather was lieutenant governor of Van Diemen’s Land from 1843 to 1847.

I went for a few walks down the driveway and had to check out the animals. 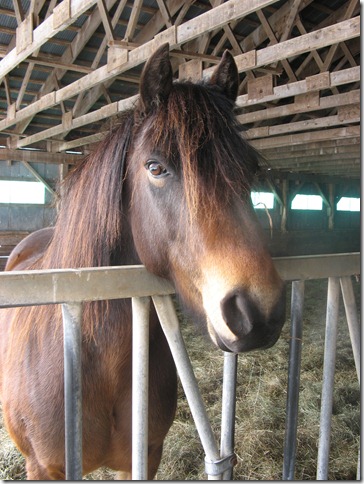 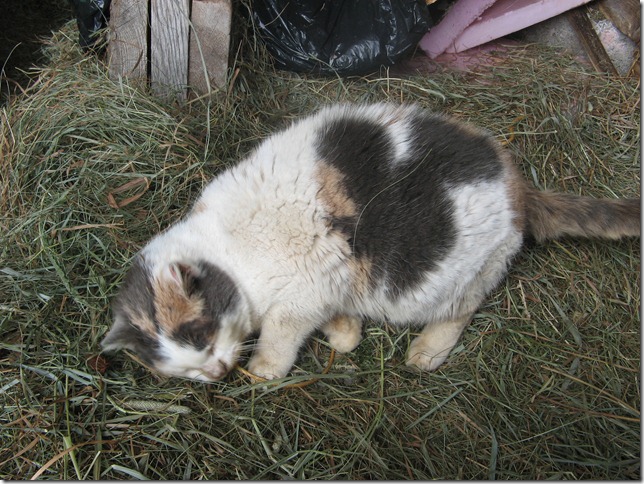 This cat was a master purrer….

On Monday we moved on to my sister’s house.  Again lots of snow.  This is the view from her house out to the Bay of Fundy. 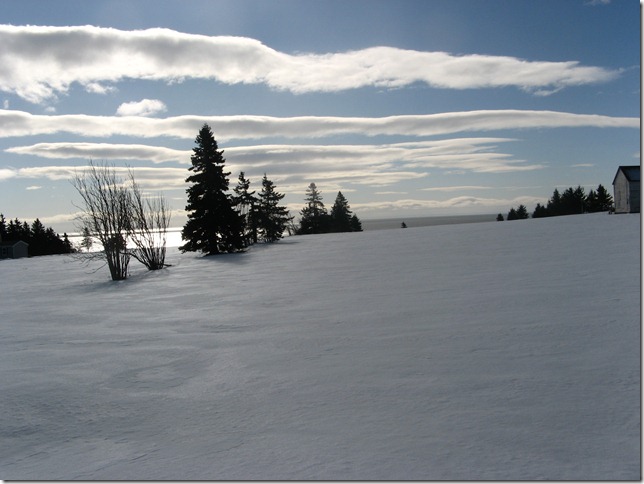 I hadn’t been to her place before and we had to stick around for a day to see the sights and visit.  New Brunswick is very picturesque.  This is the land of covered bridges. 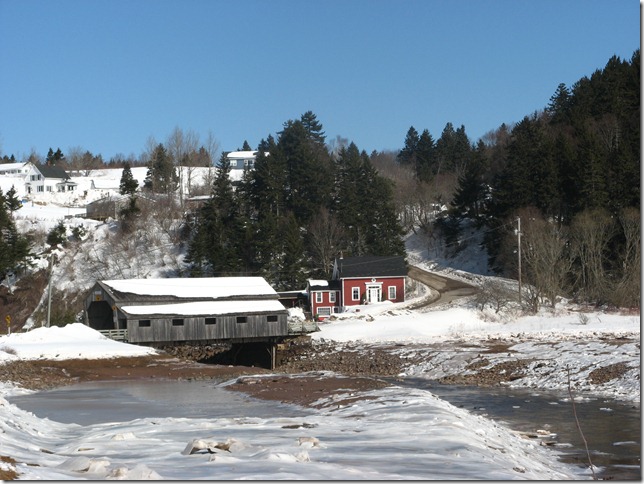 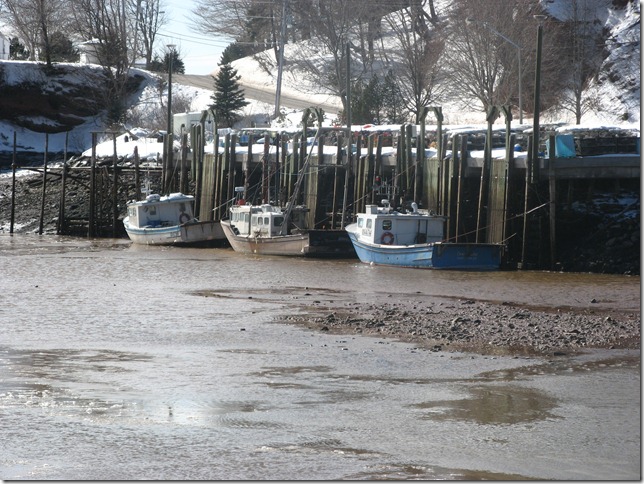 We left early this morning.  A long day of driving took us out of New Brunswick, through Quebec and on to Ottawa, where we are spending the night with another of DD’s friends.  This girl has a lot of friends

I grew up in Quebec and it holds many memories for me, some sweet, others not.  It feels familiar and homelike to me though.  What struck me about Quebec today was the birch trees, brick buildings, tall spires on churches and millions of saint names.  There must be a thousand small towns that are named after saints.  One of the most unique is St.-Louis-du-Ha! Ha!  Wikipedia has this to say about the name.

“The commission de toponymie asserts that the parish's name refers to nearby Lake Témiscouata, the sense of haha here being an archaic French word for an unexpected obstacle or abruptly ending path.[2] The Louis may refer to Louis Marquis, one of the first colonists of the region, or Louis-Antoine Proulx, vicar of Rivière-du-Loup, or perhaps the abbot Louis-Nicolas Bernier.[3]

The exclamation marks were added colloquially and have since gained recognized status among Canadian federal institutions such as Canada Post.” 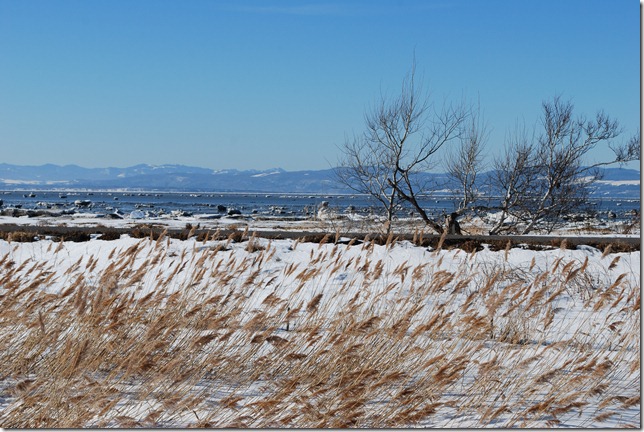 And the Montreal skyline… 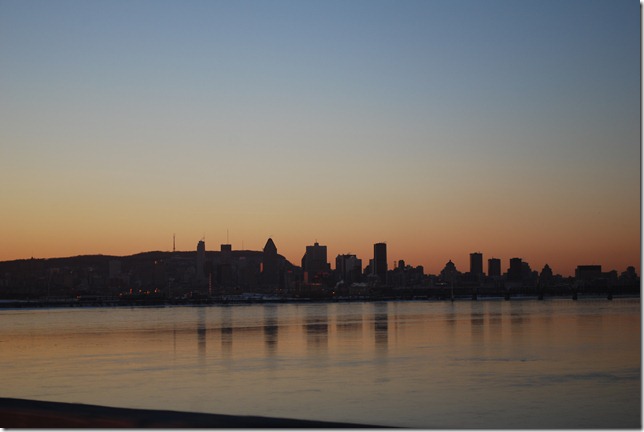 After a fourteen hour day of driving I’m feeling woozy.  I think we’ll have to go a bit slower tomorrow.  There is no one for us to visit, so no rush to be somewhere in time to visit.

We’ve had sunny days the last two.  The roads today were clear and dry and there is only a little snow in Ottawa.  Tomorrow begins leg 4: the long haul through Ontario.

On the sewing front I’ve got Maria’s goat ready to mail.  I might add another little thing tomorrow morning and I’ll find a post office to mail it from tomorrow.