This piece of work is the reason I started this blog.  I needed to share the pictures and words and this seemed the easiest way to do that.  So Victoria you bear the burden of my fall into Blogdom!

Back in May Victoria invited her readers to join her in a scrap swap and being bored with my projects at the time I signed up.  I received this nice package of scraps from Erin a couple of weeks later. 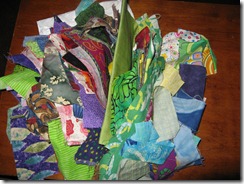 And this is what I’ve made: 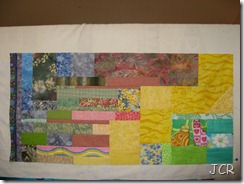 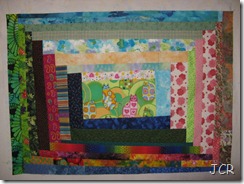 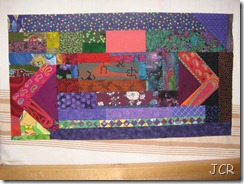 I’m going to put these three pictoquilts together into a quilt top called Three Cat Stories.  I’ve got the idea for it all worked out, now just need the time to finish it!

I used some of every fabric she sent me except for five pieces.  If Erin was to see these I’m sure she’d ask “But what about the bear fabric? Where is it?”  Well I have to tell you, the bears got all dressed up to go to the party, but then brother started reading a book out loud, they got absorbed and they ended up staying home. 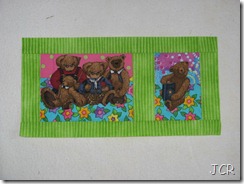 Seriously, did make the bears on the couch block to go in the party block.  I was going to call them “the wallflowers”, but it was just too bright for the rest of the setting.  So it’s a block of its own.  And I just could not fit in the Noah’s Ark fabric no matter how I tried.

This is what’s left. 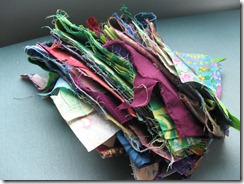 The picture of what’s left looks almost as big as the picture of the original batch of scraps.  It’s not, although I could probably make at least one more quilt block of a similar size.  However I have plans for the rest of these scraps – or most of them anyway – in my Three Cat Stories quilt top.  We’ll have to see if it works out.  I am amazed at how far a bag of scraps goes.  I made Cats in the Window first, then I was amazed at how much fabric there still was and I started to expand my vision.  Cats in the Sun came next and I knew by then that I was putting all those fabulous purples into something great.  Cat at a Party evolved easily from those exotic fabrics.  It was quite complex to put together and it took me a while to get up the chutzpah to tackle it.  I had to hand sew two seams cause I couldn’t figure out a way to get them under my sewing machine needle.

Oh and here are my bonus postage stamp blocks that I make as leaders and enders.  Twenty-three of them turned out in the last two days while making Cat at a Party. 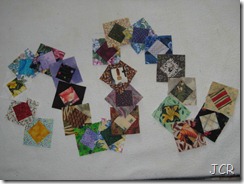