Dahn came over today and we spent the day quilting.  I was tired as I didn’t sleep well last night but it was still a productive day.  I worked on “Three Cat Stories”.  I told Dahn I had just a bit to do on it and it would take me about fifteen minutes.  Three hours later I finally called it done for now.  Then I worked on blocks for Christine’s quilt and of course I got a bunch of postage stamps done in the meantime.  Dahn brought me scraps – and I mean scraps! Baa, baa black sheep have you any wool (translate fabric scraps for making quilts and other things)?  Yes sir, yes sir, THREE BAGS FULL! 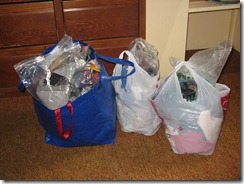 Whatever will I do with them all? I’m sure I’ll find something once I sort them out.

And here’s a photo of Dahn working on her beautiful fireweed wall hanging.  Her own dyed fabrics and stained glass design.  She’s so creative! 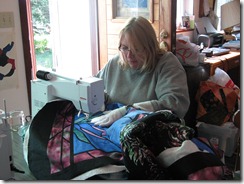 Geoff arrived home from camp around noon and talked to us steady all afternoon about his adventures.  Lots of fishing and bear viewing in this camp.  He said Phil has the bears sort of trained; when they start to get into something they shouldn’t he yells no and they react just like a dog would that was doing something wrong.  He keeps a shotgun handy though.  Lots of French people in camp.  Geoff said if he had been there another week he thinks he would have been speaking in French.  This from the guy who complains about French on our cereal box! 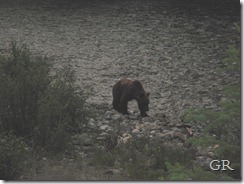