I want to say thank-you to everyone who commented on my birdie clothespin apron and the flags for Boston.  I started out trying to respond to everyone, but I don’t think I’m going to get through the whole list.  It was great to get all the comments though and I appreciate all the love.

Since I said that people who had commented on previous posts in April and May could have a second entry, I have had to do the paper slip method of picking the winner.  I have the slips all written up and in the bowl.  But I’m here alone and I want someone else to do the draw.  DH will be home sometime tonight with the two grandkidlets in tow, so I will have one of them do the draw and will post the winner tomorrow.

I have had a great Friday night sewing session between last night and this morning.  I started out playing with triangles.  When I got that huge bag of scraps last month there were several hundred triangle cut offs in it.  I decided to make them into pinwheel blocks and I just had to try it out and see what they would sew up like.  Here are four blocks that I made, but this project is going to have to wait for a while before it gets any more of my attention. 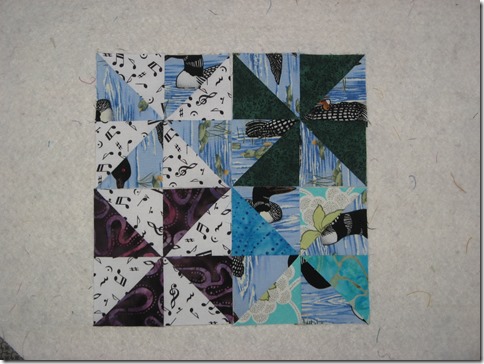 Cute huh!?  You might notice that there are some loons…

Then I spent a lot of time working on Easy Street.  I have ALL the pieces cut and I made four new blocks.  This is what it looks like now. 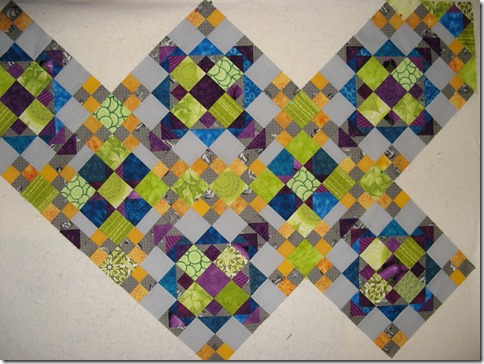 I hope to get four triangle blocks and one more square block made tomorrow; then I will have three rows done!  I have realized that the middle of July is coming quickly and feel the need to get on with this baby.

We have gale force winds here but it has been sunny since noon and the sun has just gone behind the mountains at ten p.m.  The crocuses are out in force – I saw my first one on Wednesday.  They are so pretty.  Look at how dry the ground is under them.  It is supposed to rain tomorrow, which would be great as it will help with the greening up process. 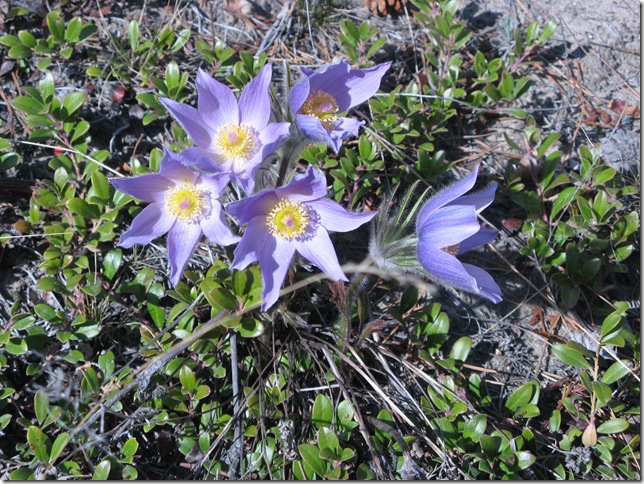 Hmm… looks a bit like the Easy Street colours…just missing the blue...

I will be back tomorrow with news of a winner.