It was a busy work week to start, but that has disappeared in a blur, as I only worked Monday, Tuesday, Wednesday, then took off Wednesday evening for a quilt retreat! I’m just back this evening and exhausted (quilting is hard work – tee hee), but I want to show all that I got done.  It was a very productive four days for me. I was delinquent in taking pictures this weekend so don’t have any of the quilt venue, quilters or all the beautiful quilts to show.  And there were some fantastic quilts being made!

Someone asked me where I go for a quilt retreat.  This one was in another small Yukon town, Haines Junction.  It is a town about the same size as the one I live in, but situated closer to the coastal mountains. 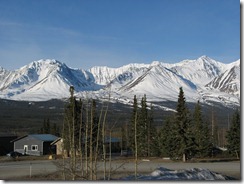 The highest mountain in Canada and second highest in North America, Mount Logan, 19,551 feet, is nearby, and the highest US mountain, Mount McKinley at 20,320 feet is also in this range of mountains.

There were thirty-four women at the retreat: three from Haines, Alaska, two from Mendenhall which is about an hour down the road, one from Faro,Yukon, two from my town and the rest from Whitehorse.  No quilters from Haines Junction attended, although a number of townspeople came by to see what we were doing.  We were in the town office and convention centre, a lovely bright space, with a gorgeous view.  There was also a mixed martial arts workshop, a poetry reading and story telling evening and a young writer’s workshop going on in the building this weekend.  Busy place! 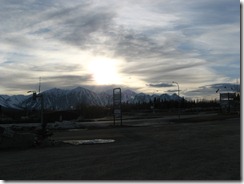 Our dinners were catered by The Backerei.  These are two men who had a very popular coffee house and lunch restaurant in Whitehorse.  When they left they had restaurants in three other locations and are now settling in Haines Junction.  The food they make is superb.

Here is the lowdown on all I accomplished.  The first morning I spent catching up on some blocks I had to send in the mail.  This block is for Michele, who is collecting blocks to make a raffle quilt in honour of her nephew Danny who was killed by a drunk driver in 2004.  Click on her name to link to her blog post if you would like to contribute. 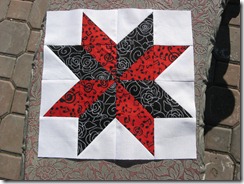 Next I made my 6 1/2 inch block for the Modern Mystery Round Robin that Michele has organized. Our blocks travel to seven other participants who will each add a 1 1/2 to 2 inch border.   I am very late in getting my block in the mail.  Hopefully it gets where it is going soon. 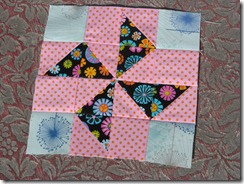 Third up, I made my blocks for Medora in the 6 1/2 inch block swap.  She asked for a star block or a nine patch, so I made on of each.  She also asked for pastels, which I don’t do that well.  I hope I have it right. 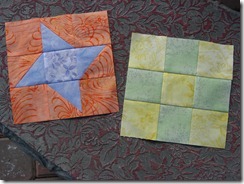 I spent some time working on my mystery Christmas blocks and got five more finished.  I was short a couple of pieces of fabric so couldn’t get the sixth finished.  I pieced four blocks together, but didn’t have the pattern with me and I don’t think I did it correctly.  Sigh… I predict some unsewing in my future. 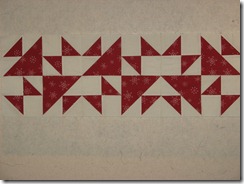 I also made a little progress on Block 1 of Merry, Merry Snowmen.  This block isn’t finished yet though…. 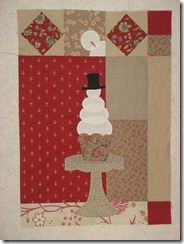 I  worked on this UFO table runner, finishing the stitching in the ditch quilting around the bias tape.  Big job!  This is one of the items I resolved back in January to get finished this year.  Next a little echo quilting and I think I’ll be able to bind this baby. I got another 200 two inch blocks joined … 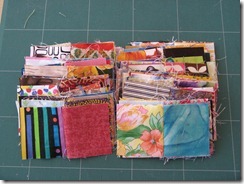 And for the crowning touch …. TA DA…. the Sunshine and Shadows quilt is pieced!  All 195 blocks are together and it is ready for batting, backing and quilting! 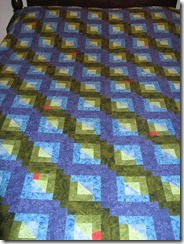 And I will have to be back later this week to display all the mail that I received on Friday.  After the lull there is a storm!

Email ThisBlogThis!Share to TwitterShare to FacebookShare to Pinterest
Labels: Quilt retreat, This Week I....