Just a quick note since I never got anything written last weekend.  It was a long weekend here in the Yukon and the weather was glorious!  We spent two days out in the boat and the third on the beach.  My swimming buddy and I decided we’re going to try and bag as many bodies of water as we can this summer.  We’re up to eight lakes now, and we even did some in the nude.  Did you know that last Saturday was international skinny dipping day?  I didn’t either until someone informed me. The warmest lake we were in was 21degrees C; the coldest was 14 degrees C.  It was cold….brr! 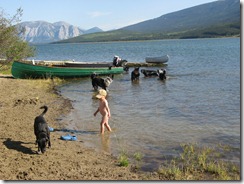 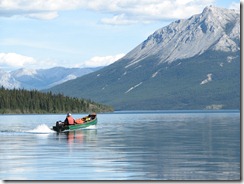 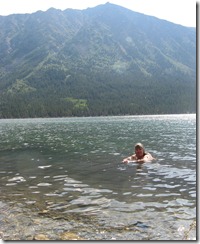 I spent several hours one morning on my daughter’s quilt.  I can’t show it yet because she’ll nag me about getting it finished.  I did however finish my last block for the blue work wall hanging I’ve been sewing for a couple of years now. 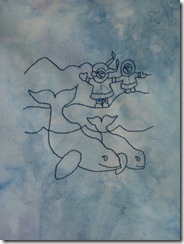 Now I just have to sew them together….

We saw this fabulous bird down by the river. 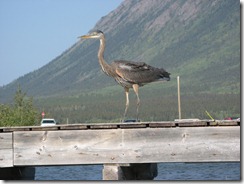 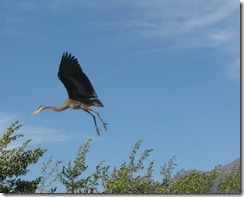 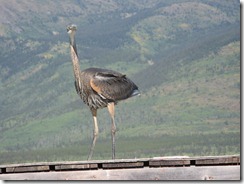 After discussing it with our friends we’ve decided it’s a blue heron, but we want to check with our local bird guru who’s away on a canoe trip right now.  The only other blue heron I’ve seen was really blue.  This bird was brown.  Blue herons are not common in Yukon but there have been a few sightings.

Well it’s has been raining for the last three days and promises more for this weekend.  It’s Friday Night Sew In and I’m off to sew!