A weekend of bluegrass

I’ve been at the Kluane Bluegrass Festival all weekend.  Two and a half days of some of the best bluegrass music in the world.  For those who don’t know what bluegrass music is – here is part of what Wikipedia has to say about it.

Bluegrass music is a form of American roots music, and is a sub-genre of country music.  Bluegrass was inspired by the music of immigrants from the United Kingdom and Ireland (particularly the Scotch-Irish immigrants in Appalachia), and was influenced by the music of African-Americans through incorporation of elements of jazz.

In bluegrass, as in some forms of jazz, one or more instruments each takes its turn playing the melody and improvising around it, while the others perform accompaniment; this is especially typified in tunes called breakdowns.  Breakdowns are often characterized by rapid tempos, and unusual instrumental dexterity and sometimes complex chord changes.

Bluegrass pioneer Bill Monroe characterized the genre as: "Scottish bagpipes and ole-time fiddlin'. It's Methodist and Holiness and Baptist. It's blues and jazz, and it has a high lonesome sound."  Bluegrass is traditionally played on acoustic stringed instruments. The fiddle, five-string banjo, guitar, mandolin, and upright bass (string bass) are often joined by the resonator guitar (also referred to as a Dobro®) and harmonica.  A distinguishing characteristic of bluegrass is vocal harmony featuring two, three, or four parts.

For those who do know bluegrass, we got to listen to Dale Ann Bradley, Claire Lynch, Michael Cleveland, Grasstowne, the Gibson Brothers, Jim Hurst and Balsam Range.  There were a couple of Canadian bluegrass bands there as well – Headwater and Four Chords of Wood – and a Canadian blues duet, Rick Fines and Suzie Vinnick.  Plus our local talent, who are also very talented, Kevin Barr, George McConkey and their friends.  There were two venues, one that holds 425 people and the other 150 people, so this was up close and personal fun.  The people from far away love coming here because it is so beautiful and because we treat them really well.  Plus they are always amazed at all the light this time of year.

I took some hand sewing with me but didn’t do a stitch.  I did get a photo of the gorgeous theme quilt. 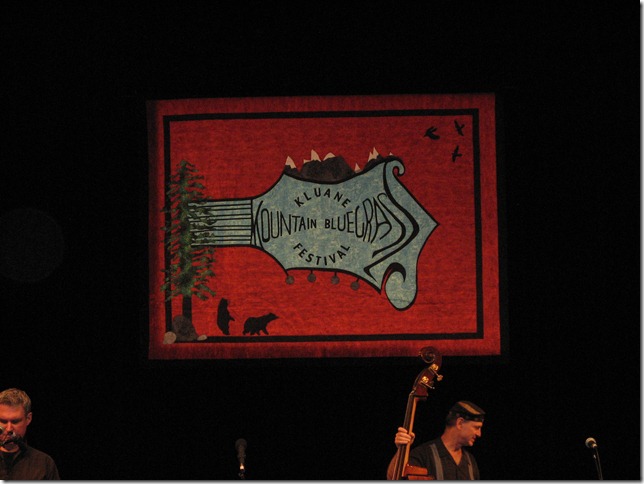 And here are the local musicians having a ball in the smaller venue. 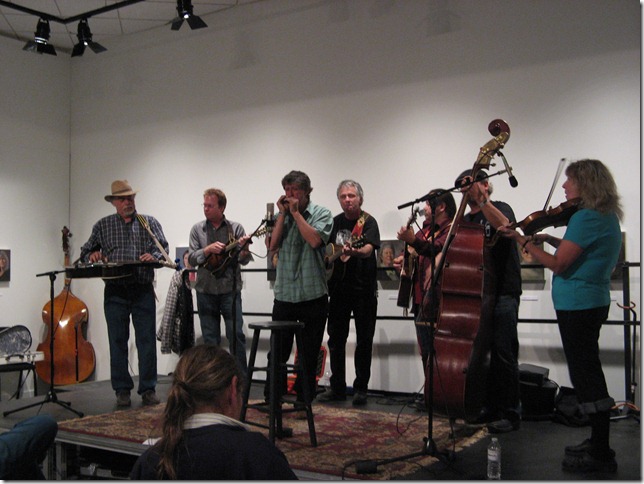