It’s been a slow week around here.  The weather is snowy, rainy, cold and very much like winter.  I put my car in the ditch going to work yesterday.   I have studded tires and AWD and I NEVER have traction issues, but I got a flat tire and the road was glare ice.  Other than the flat tire and some gravel in the brakes there was no damage to me or my car, but while DH and I were there changing the tire one of my neighbours rolled his brand new SUV in the same spot.  He had his wife, two children and dog in the vehicle.  Thank God they only had scrapes and bruises, but the vehicle was very smashed up.  The daughter (about 12 years old) commented when I arrived at the vehicle – “seat belts DO work!”  Then a third car went into the ditch, right side up and right way around in the same area.  Needless to say I was shook up and when we finally got things sorted out about noon I had long given up any plans to go to work. The highway crews hadn’t been out – they thought since it was only –2 it wouldn’t be icy!!

I haven’t done much sewing in the last few days -regrouping after finishing the quilt I guess.  I did make this trio of hot pads (or coasters) from my pile of little scraps.  My LQS saves them for me for the postage stamp quilt but I have so many, sometimes I just have to play.  These really are square although they look wonky in the first two pictures.  I’ve given all three away already….but I have enough little scraps in these colours left to make one for myself. 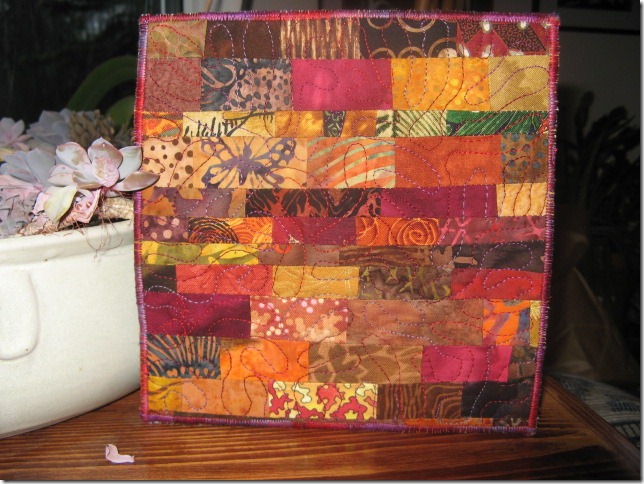 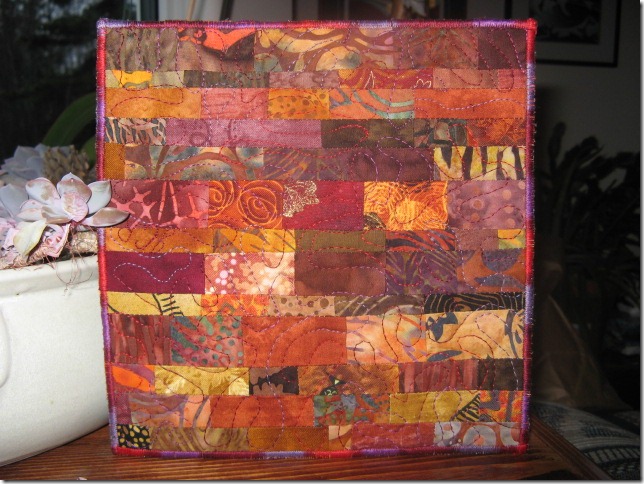 I am participating in Friday Night Sew In this week – haven’t yet decided what to work on – and on Saturday my local “craft” group is having an all day get together.  I guess I’ll get back on board with sewing then.

Peg, from Pieces on my Mind and I did a swap of some vegies.  I sent her a lettuce and tomato salad and she sent me these two lovely oranges, carrots and pumpkins!  I’m thrilled as I didn’t have any orange vegies in my original line up!  Good for Vitamin A you know…..and C as well…. 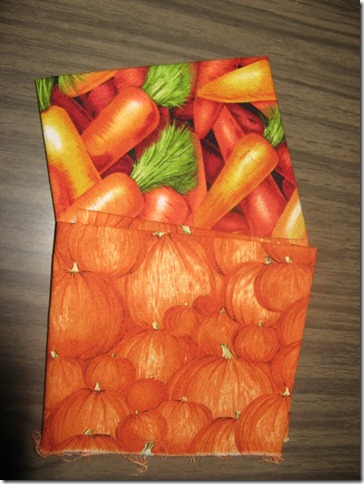 She also sent me a FQ each of these cute quilting themed fabrics!  I’m sure to think of something fun to do with them.  Thanks so much Peg! 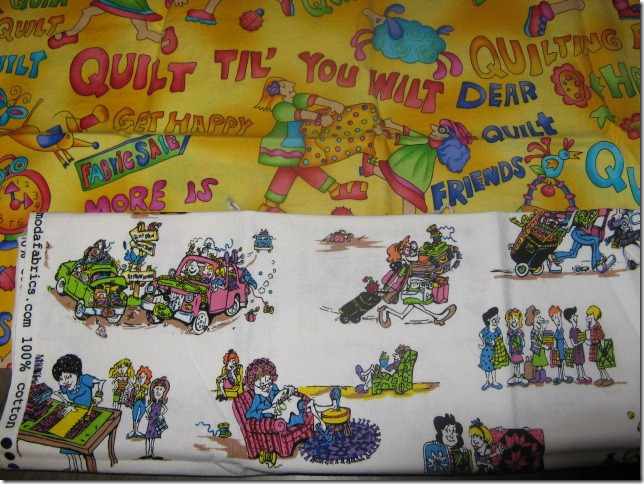 And on a final note – thanks for all the loving comments on my quilt.  I do love how it turned out.  There were two ladies, Peg and Lesley (Canadians of course), who braved answering the quiz about the provincial tartan.  They were both right although Peg waffled a bit on which province.  It was Nova Scotia… 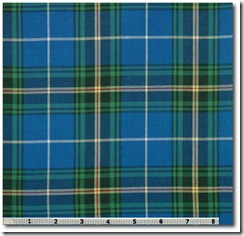 Peg picked the right fabric but wondered if it was the Yukon’s tartan.  She opined that the Yukon isn’t a province ….our “premier” (head of the legislative assembly) thinks the Yukon is a province :)   This is our tartan… 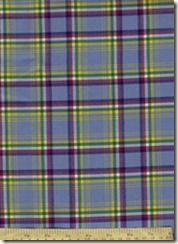 The Yukon tartan is a recent and non-traditional addition to the world's official tartans. The woven cloth is composed of green, dark blue, magenta, yellow and white stripes in varying widths on a light blue background.

There are prizes in the mail for both of you.  Congratulations on your Canadiana knowledge.